April 8th 2019-Curse Mackey (Evil Mothers, Pigface, My Life With The Thrill Kill Kult), along with Rona Rougeheart of SINE, at the request of David J, filled in for Peter Murphy who was unable to perform due to illness. This was Peter Murphy’s rescheduled, final date of a monumental 5-month, ninety-four date world tour. A statement from Peter Murphy’s official website stated that he was suffering from severe physical and mental exhaustion. Mackey was in attendance initially to appear as a guest vocalist for SINE when he was approached by David J side stage during the SINE set. A statement was issued on Peter Murphy’s official website, shown below.

Rougeheart (who as SINE was the sole opener for Peter Murphy’s rescheduled date) and Mackey joined David J along with guitarist Mark Gemini Thwaite and drummer Marc Slutsky in what David J described to a near capacity audience as an “Improvised, mash-up, deconstructed Bauhaus in dub” set. The initially stunned and emotional crowd, who would have otherwise been left devastated by Murphy’s cancellation ultimately were heard chanting in praise of David J and crew for the eight-song once in a lifetime performance.

“When it comes to performance I relish the dangerous edge and due to circumstances beyond my control I found myself walking precariously along that path a few nights ago in Orlando. While watching from the wings as the captivating Rona performed I was seized by the idea of roping her into the maelstrom that was to come. Then when Curse joined her I was immediately impressed by his stage pretense. Ok! Another Shang high victim! To their credit they did not think twice about my proposition and together with MGT and Marc Slutsky we went out on stage to deliver an improvised set based around Bauhaus material. ‘Improvise. Deconstruct. Dub’ was the mantra adopted for that night and about ten minutes in it occurred to me that this could actually be the seminal moment where a new collaborative project comes into being! The prospect of which is extremely exciting! The future is unwritten and we now have a pen with a steel sharp nib and a lot of ink!”

“This record for me is like a personal exorcism. The songs had to get out of my system. Working from a solo project perspective presented an opportunity for me to write with a clean slate, to broaden the brush strokes and create something that represents where I am at today. Influenced by the past and all the experiences of my life to this point but not constrained or obligated to it.”

Instant Exorcism was produced by Curse Mackey and Chase Dobson (Tycho, Black Tape for a Blue Girl) with additional recording sessions with Charles Godfrey who engineered the last two Yeah Yeah Yeahs records and has worked with …Trail of Dead, Explosions in the Sky and co-produced SINE’s recent release, INSOMNIÆ.

The album was mastered by Stephen Seibold who has worked extensively with Mackey as members of Pigface. The first two singles, O’ Blasphemy and After You, Destruction off Instant Exorcism can be heard and pre-orders can be made via Curse Mackey’s bandcamp here. SINE has a new album out entitled INSOMNIÆ and can also be heard below.

Mackey will be opening for Industrial Dance legends My Life With The Thrill Kill Kult on their Strange Affairs tour. SINE will also be opening on the dates of 5-31 in Austin and 6-1 in Houston. 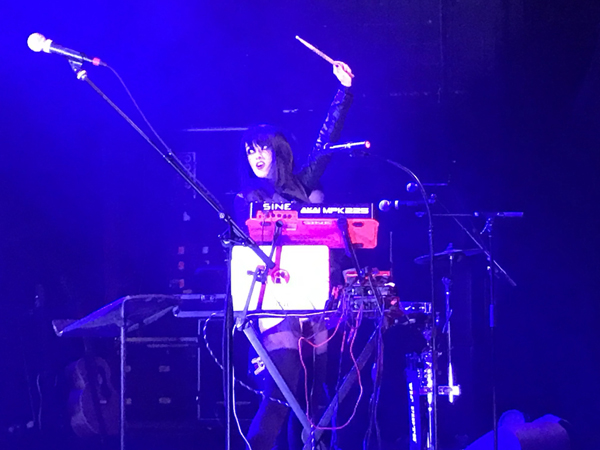 Keep up with SINE

Keep up with Curse Mackey