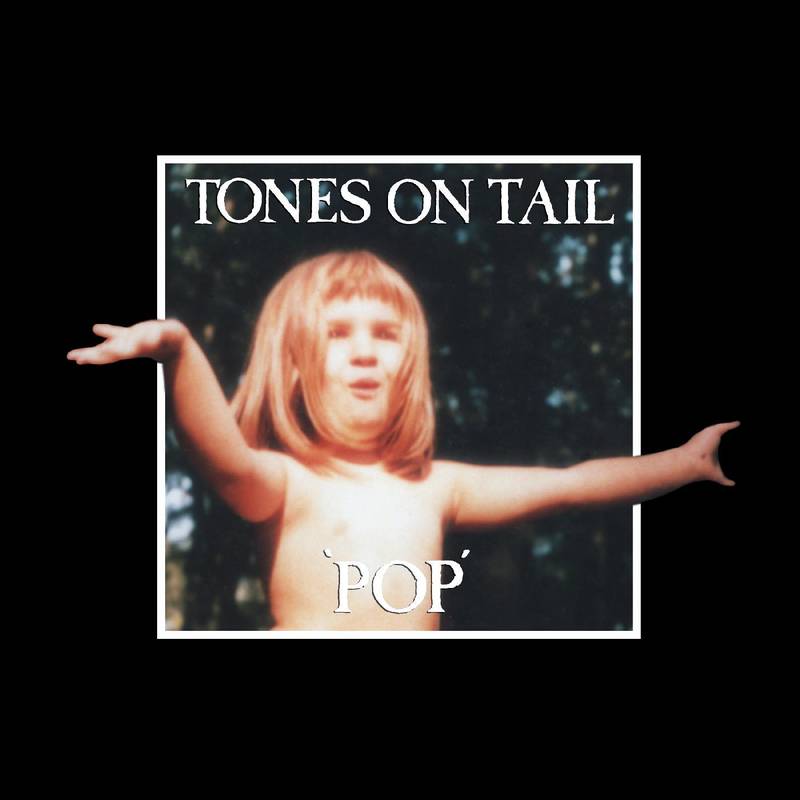 Rewrapped in a shimmering fresh palette and with the original track listing fully restored, ‘Pop’ makes a welcome return to American turntables for August’s alternative Record Store Day (Covid-19, we thank you). Some thirty six years after its initial outing and now dressed in an oh-so politically correct sleeve, derivative of the original, cut from the same cloth.

Tones On Tail was an initial outlet for Daniel Ash to experiment with his more unconventional ideas, ideas that would not work within his role in Glam/Goth pioneers Bauhaus. Teaming up Bauhaus’ backline and then flatmate Glenn Campling, a technology vacuum and like-minded soul open to anything, the duo created ‘A Bigger Splash’ blending treated vocals with Eno-esque soundscapes. They were augmented in 1983, following the demise of Bauhaus, by that bands drummer; Kevin Haskins. By adding Kevin this not only gave them a real drum sound but allowed them much more freedom than the primitive Dr Rhythm ever could.

Described by Daniel posthumously as the band he had the most fun with, whilst Glenn reflected, likening his time in Tones On Tail to that of “creating monsters in a sound lab” and Kevin, well Kevin just likes hitting things.

‘Lions’ kicks off proceedings, which to this listener sounds much richer and more opulent than it ever did. The Korg pipe synth and the Autoharp working effortlessly in unison with each other, while the perfectly honed subtle harmonics that litter ‘Lions’ somehow keep the whole thing neatly stitched together. Daniel’s dreamy vocals delivered as a perfect framework for the first of Glenn’s self-confessed “electronic babies”.

The tempo is kicked up a couple of gears as ‘War’ is jerked into life by Glenn’s incredibly funky bass notes, and its these notes that form the skeleton that the band’s trusty Dr Rhythm drum machine (making one of its last appearances here) bounces off, working alongside Kevin Haskins’ percussion , created by Daniel and Glenn’s mutual friend, John Barraclough, it create a wall of opposing beats that are smashed to pieces by the interjection of Daniel Ash’s effect laden guitar, all the while the ebow delicately weaves in and out. ‘War’ is the sound of a band having fun, a lot of fun.

With its inspiration taken from The Cure’s ‘ Love Cats’, Kevin gives life to ‘Happiness’ retaining the same pattern throughout the track, the simple bass line (provided by Daniel this time) and up-tempo beat gives this one a real warm summery swing feel, interjected with Glenn’s synth and Daniel’s guitar. There’s a fabulous moment a minute or so in when the whirling synth begins throwing shapes in every direction, keep an ear open for this. I can’t imagine this song bearing any other title than the one it was born with it does exactly what it says on the tin.

‘The Never Never (Is Forever)’ uniquely blends a fusion of Kevin’s ‘real’ drum kit together with his Simmons electronic kit, Daniel’s manic guitar, as brief as it is, is an integral part of this track but again it’s the slow brooding swirling Roland string synth towards the songs refrain that is just sublime.

The mighty ‘Performance’, the second of those electronic babies fights it way into life amongst a hail of squalling feedback as the pulsing hypnotic keys form the backbone in which many layers drape. Kevin kicks an unexpected earth shattering drum that paves way to some phenomenal bass playing courtesy of Glenn. ‘Performance’ is an unrivalled highlight of this record. Daniel announces “We take control today” and on this, they certainly do, a killer track.

Its perhaps worth noting here that not one track thus far follows that well-trodden (dark) path, which would have been so easy to do given Tones On Tail were some kind of hybrid, bastard offspring of sadly mislabelled parents so by default there could have been an easy way out.

Largely created spontaneously in the studio and based around a pair of once discarded throwaway lines as ‘ Slimy Fungus’ lurking on a Bauhaus •••” compilation tape containing other random sounds and samples with the intention to use during an early John Peel radio session. ‘Slender Fungus’ is a bizarre, unconventional combination of over amplified vocal percussion and Burroughs style cut up lyrics. Out on a limb here but strangely fascinating yet seductively creepy at the same time, the multi-tracked chorus effect on Daniel’s lead vocal is delivered as some kind of unnerving mantra whilst Glenn and Kevin throw in unsystematic disturbing shapes creating a virtual chimera of a track. Kevin takes up the story; “I came up with the idea of creating a song using only our vocal chords. I think that Glenn and I created the percussive loop as a foundation to build upon. These were pre- sampler days so our clever engineer recorded the percussive part onto quarter inch tape and made a twenty foot loop by gluing the two ends of the tape together. He then assembled three or four microphone stands about four feet apart from each other and fed the 20 foot piece of tape, from the reel to reel and wrapped it around the stands. (Are you still following me?!) , literally creating a huge analogue tape loop. This was then recorded on to the multitrack for several minutes and the rest of the song was built on it from there. (I was particularly enamoured by Glenn’s beautifully harmonizing, descending ooohs”).

‘Movement Of Fear’ puts Tones On Tail right back into the territory they strived so very hard to leave, Glenn’s incredible stalking haunting bass line allowing Daniel to interject it with lacerations of drenched tremolo guitar & ethereal saxophone are amplified by Kevin’s structured but sparse single treated beats of his Synare drum. Lyrically ‘Movement Of Fear’ is an ode to Daniel’s former Bauhaus colleague and frontman; Count Murphy, “Weird Pop, you can’t control, a smashing guy, a sack of gold” (whilst still an onlooker, David J once described Peter Murphy as “pure gold”) “Teach me to be happy, teach me control” The Count responded a year later with his own retort – ‘The Answer Is Clear’ “Teach him to be happy, teach him control” “with your sunken eyes and your pretty looks” – right back at you. The Fun Lovin’ Criminals and Nouvelle Vague were both listening….

Adorned with, and arranged around the lush sound of the twelve string guitar ‘Real Life’ slowly builds from its stringed intro into a ferocious yet rhythmically melodic piece, a lone, sympathetic synth looms in the distance occasionally coming up for air but its not until four minutes in that Glenn and Kevin really come alive, a reversed guitar twisting in and out playing tricks amongst a fabulous bass line. At its lyrical refrain Daniel suggests the “colours on the landscape grow brighter now” and “the long dark years have passed by” perhaps he’s in a reflective mood?

Largely a Campling / Haskins creation, the gorgeous lengthy ‘Rain’ closes the album as it trips and glides by way of a series of dreamy layered synth loops and short vocal interjections, there’s an incredibly beautiful moment when the imitated rain begins to fall, but It’s not until the song reaches its mid-way summit that the layers of wistful vocals make their appearance, cued in by Glenn’s 8 string Kramer bass. Eight minutes later and its Kevin’s sparse drum beat that prompt each of the many layers to slowly fade away one by one. If a single body of work could be considered a masterpiece then this is it. Kevin Haskins; “The unique structure of ‘Rain’ was born out of the “limitations” of a pre digital analogue studio. In order to record instruments, effects or vocals backwards (which we loved to do) the engineer would have to physically remove the multi- track tape spools from the machine and place them back on to the machine in reverse. We would then hear the recording playing backwards and record whatever it was that we wanted, in this case backwards reverb on the vocals. However upon hearing the instruments played back backwards we were really struck by the sound of the entire track, especially Glenn’s synths and Daniel’s Ebow guitar which were very Eno-esque. I suggested that we use the entire backwards instrumental to begin the song with and segue way in to the original track”.

Tones On Tail were embraced by small pockets around the globe lamenting the Bauhaus fall out, but within those pockets remained a steadfastly loyal fan base. Impossibly English, an enigma, and have remained that way, call them niche, odd, weird, whacky, whatever but one thing they never were was conventional. Perhaps it’s time to share our little secret….