Swedish post-punk goth rockers Then Comes Silence recently released their fifth full-length album entitled ‘Machine’ via Metropolis Records (North America) and Oblivion/SPV (R.O.W.). Their music has attracted worldwide attention and is praised for its gloomy apocalyptic sound and dystopian message. ‘Machine’ hinges on the darker goth rock side with songs centered around dealing with death and unhealthy obsessions. Their sound could very easily have stepped out of the pages of the past from the early 80s scene but with a more refined delivery. This makes my elder goth heart very happy to see bands like Then Comes Silence carrying the old torch into the present but with a distinct sound all their own.

Then Comes Silence took some time out to answer a few questions for Torched on their new release ‘Machine’, how the band has been affected by the COVID-19 outbreak, when and where it all started for them musically.. plus more! 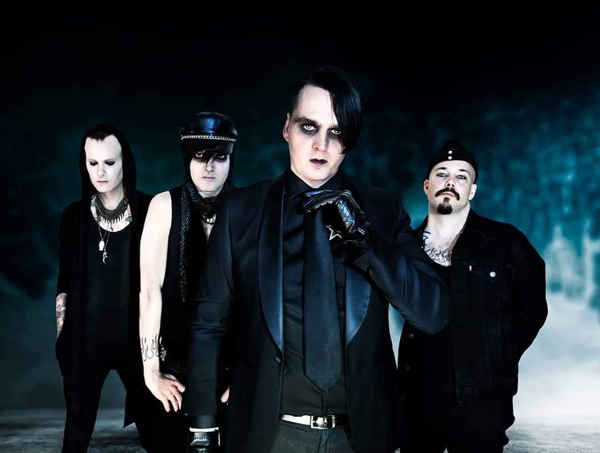 How has the band been affected by the COVID-19 pandemic? You currently have concert dates and festivals lined up from May through December of 2020 in Denmark, UK, Czech Republic, Austria, Portugal, Germany, Switzerland and France. Do you foresee cancellations or rescheduling of any of these dates?

Unfortunately, like most… if not all other artists, the risk is very high that we will have to postpone. It’s nothing we want to do of course, but it’s not under our control. I think we can be lucky to have social media. Imagine this same situation 15 or 20 years ago.

Even though we won’t be able to play and tour like we usually do, the new album gets good attention on the social platforms. To me ‘Machine’ has become very much connected to 2020. Almost everything around this release is different from previous releases.

Did you grow up in a musical environment? When and where did it all start for you?

There was a lot of music in my environment growing up from David Bowie, Saga, Japan, Grant Lee Buffalo and Prince. In my teens I started to learn my favourite songs on the guitar and I just kept going. Nowadays, I look back at my upbringing and am thankful that I got such a rich musical start and could just keep on where it left off.

Yes, my father is a music lover so i’ve grown up with music around me. For me everything started with a tape that my father had. It was a compilation of early The Beatles’ hits, like “Help”, “She loves you”, “Hard day’s night”… i loved that tape and definitely it influenced a lot the way i understand music. It was around the time when Michael Jackson’s “Thriller” was released. That video made a huge impact on little me too.

Not really, I became interested in music when I was about 13 years old. I started a punk band with some friends around that time, and that’s how it started.

I didn’t grow up in a musical family. Well, my parents listened quite a lot to music, but no one played any instruments. I started playing music quite late. Except for a school show where I played the pan flute when I lived in South America as a kid, I waited until I was about 14 or 15 before I learned to play an instrument for real.

You went through a change of line-up before your new release Machine.. How has this affected the band and the sound of your music?

Both Mattias and Hugo are just as ambitious as me and Alex are and they both are great musicians. We really believe in the band and we are working hard to make it as good as possible.

Then Comes Silence’s fifth studio album Machine was recently released via Oblivion/SPV (EU) and Metropolis Records (US). What was your inspiration behind your new album?

It’s mostly about dedication, energy and discipline. It was time to make another album. Inspiration is all around us. All the time and everywhere. Next year it’s going to explode with a massive avalanche of releases. Everyone has gone thru their heads more than a couple of rounds with all sorts of emotions coming on, anxiety, fear, sorrow, retreat, abstinence, desire and reflection. There will be a lot of catching up in 2021.

Are your lyrics generic or based on real experiences? How do you keep the creativity flowing in regards to writing your lyrics?

My opinion is that lyrics should be self-experienced or used as a metaphor for what you have or are afraid to experience or practice. I think and worry too much, so there’s material for sure. I don’t like songs with too much words in them. I prefer to keep it simple and short.

When you first started out as a band you didn’t use labels like post-punk or goth, but instead embraced more of a horror post-apocalyptic image. How do you feel about being labeled a post-punk / goth band today?

We don’t care much about labeling music. But it makes it easier for people to find music they like if its labeled in a genre.  I listen mostly to music in the same genre as our own and I’m glad that we have the opportunity to play with them.

Music, movies, books, life, death, anger, happiness, hate, sadness, love… almost everything can be a source of inspiration, good or bad.  The important thing is to use negative energies to create, not to destroy.

Keep up with Then Comes Silence