Senegal’s Fakeba and Producer John Fryer have truly set the bar with their latest collaborative effort, the extraordinary full length album Jotna. The music takes us on a journey here that fuses genres and continents, merging tradition with futurism in a way that non of us would have ever expected. Fakeba, also known as ‘The Queen of Africa”, emits a radiant and powerful energy with her vocals sung in her native Wolof language. This gives us a sense of mystery and intrigue. Fryer adds his signature electronic soundscape adding a futuristic feel that reaches more of a transcending space. This album, in my opinion, is truly ground breaking and if anyone could pull something off this brilliant, it would be non other than the legendary music alchemist John Fryer himself.

When I first sat down to review this new album Jotna.. I found myself trying to decipher and translate the lyrics from Fakeba’s native Wolof language into English. I thought if I knew what she was singing about, it might spark a few ideas that I could incorporate into my writing. My need to know what she was singing about changed when I started listening to each individual song in depth and realized that it was more about how the music translated into feelings. The songs connect more on a primal level with a native feel and exotic tribal sounds of Africa, yet at the same time reaches futuristic soundscapes.

Each song has it’s own unique sounding arrangements that brings together Fakeba’s powerful and vibrant voice along with Fryer’s atmospheric sounds. In a recent interview with ElektroSpank, Fakeba says that “Jotna speaks about the fact that the moment to change everything has come, that there are no more frontiers, no more racism. I also sing about the sorcerers and voodoo. In “DaKaR,’ I speak about contamination.” She goes on to say, “I also sing about the sea, which is the mirror of the world. I also sing about children, because I have an association called Le Monde de Fakeba, which helps orphan African children.” Jotna sets the stage for a real positive change and made me realize that there are no boundaries, borders or even language when it comes to creating music.. the only limit is our own imaginations. 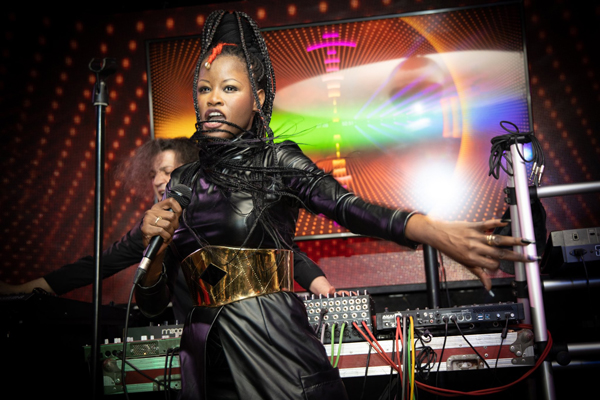 Fryer is a multi-platinum selling record producer and musician. Starting in 1980 at London’s Blackwing Studios, he worked for some of the most prestigious indie labels at the time like 4AD, Mute, and Rough Trade. He has produced and worked with many influential artists for which the list is both extensive and impressive including; Cocteau Twins, Depeche Mode, Wire, NIN and Love And Rockets. John was also a long standing member of Ivo Watts-Russell’s ‘ This Mortal Coil and has had his own bands over the years including; DarkDriveClinic, Muricidae, Silver Ghost Shimmer and now Black Needle Noise. Fryer’s first collaborative work with Fakeba was when he invited her to sing and write the lyrics for the ground breaking Black Needle Noise single “System Bi” which was released in December of 2017.

All images courtesy of Fakeba/Facebook