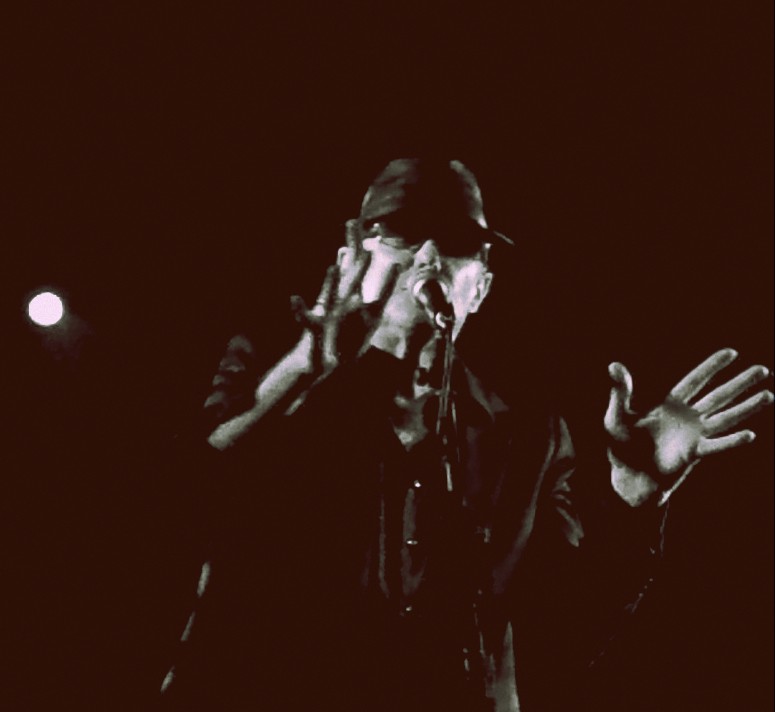 Pat Fish is the last of the great British Troubadours, the epitome of ‘Have Guitar, Will Travel’.

He used to have a band and he used to have cancer, he now has neither. Alan McGee once said of Fish “The Jazz Butcher is one of the most brilliant incisive pop writers that Britain has produced since the glory days of Ray Davies and Pete Townsend” and he isn’t wrong, cruelly underrated and too intelligent for his own good. Fish kicks off proceedings with a stripped down Keeping the Curtains Closed from his rather magnificent and aptly named Fishcoteque album. A relatively new song but a set mainstay for a while now is Melanie Hargreaves’ Father’s Jaguar – a tale from the posh side of Liverpool apparently. From here on in though he dips into his mid ‘80’s Glass Records catalogue by dusting down the fabulous Vienna Song dusted down and dedicated to this writer, its my favourite Fish ditty you see and he knows it. Fish, trips and glides through Big Saturday (from the Sex and Travel album, which contained the last Jazz Butcher recordings featuring David J within its ranks – a fond farewell, Sex and Travel – geddit?). The Human Jungle steals its title from an early sixties TV series starring Herbert Lom, again faithfully reproduced. It’s actually very enjoyable to hear these former full band compositions played as they were originally created, bashed out on a guitar. He closes his all too short set with a relatively new one; Never Give Up “I agree with Dave, Embrace Your Dysfunction” the latest nod to his former JB colleague and current headliner. Actually these little lyrical quips do appear from time to time, they are also reciprocated, you just need to know where to find them….Fish is called back for an encore by the handful of enthusiastic punters, “any requests?” closing the evening’s set with the very song that kick started The Jazz Butcher all those years ago; Southern Mark Smith. Fish, Opting to replicate the arrangement from A Scandal in Bohemia rather than the fast paced 45 version the predated it….

David J ambles on with his two band mates, a mini orchestra if you will, for this evening’s performance, pianist Robert Vasicek and violinist Karel Holas both veterans of the recent album sessions. His set is declared open with a faithful reading of Not Long for This World the title track from his 2011 opus. Here to promote his new album Missive to an Angel from the Halls of Infamy and Allure David, Robert and Karel dip heavily into that project tonight. I Hear Only Silence Now is delivered in its new arrangement (sans Emily Jane White’s ethereal vocal), renditions of The Auteur, Blue Eyes in the Green Room, Copper Level Seven and the haunting Clandestine Valentine follow, but its the title track that packs the punch this evening with an astonishing violin played by Holas, a musician who is clearly at the very top of his game. David authentically reproduces the title track from 1985’s Crocodile Tears and The Velvet Cosh a song that has had more lyrical rewrites than…

A new jazz tinged arrangement of Candy on the Cross at times bears some slightly off kilter resemblance to The Doors Alabama Song, this once fragile haunting number now takes on a new resonance in this alternative reading. Candy is a sordid tale of teenage prostitution on the Caledonian Road as witnessed first-hand by the song’s writer whilst spending time in London in the early 1990’s. David is an incredible observational writer and lyrically he reached his zenith on this one.

Woven into this evenings set is a pair of hand-picked Love and Rockets numbers. Thrown in for good measure are Dog-End of a Day Gone By from their Psychedelia tinged debut album 1985’s Seventh Dream of Teenage Heaven and Shelf Life (from Sweet F.A). The latter, as David explains, was written directly after its author had received a phone call from a charming MCA representative informing him that no follow up album to Urban Urbane would be required….”How many A&R men does it take to change a light bulb? I’ll get back to you on that…”

January 10 2016 is a day etched deep into our psyche, it is of course The Day That David Bowie Died where were you asks David before telling his own personal story in song. The sentiments captured within its lyric I’m sure are shared the world over.

A project with Dark Flowers’ Paul Statham (B Movie, 100 Men) has spawned The Stars Stand In, (to be included on the forthcoming Dark Flowers album; Indian Summer) the result of this intriguing collaboration is performed this evening.

Initially this UK leg of his “Missives and Miles” Tour was to include dates in Nottingham and Newcastle both unfortunately fell, due to “Some other band reforming” that “other” band is of course Bauhaus who are due to grace the Palladium in Hollywood very shortly with a series of sell out shows. David had to cut his tour short to attend rehearsals. Bauhaus are represented here this evening with David’s grand statement; Who Killed Mr Moonlight?

Knocked out during sound-check earlier, the trio trialled Sinatra’s classic It Was a Very Good Year authentically and stylishly reproduced as this evening’s set closer. David, resplendent in Fedora, croons his way through Ervin Drakes ’61 original, performed initially by Bob Shane with the Kingston Trio but its Sinatra’s 1966 interpretation that’s recreated, it struck me whilst watching this particular performance how suited to this style David actually is. Some of his best work has seen him delivering almost spoken word set to a collage of soundscapes, not dissimilar to the arrangement of It Was a Very Good Year. David J has recently suggested that Missive to an Angel from the Halls of Infamy and Allure could be his swansong, his final solo album. We could be at a crossroad.