Curse Mackey, a self proclaimed “shadow figure” of the electronic-industrial underground, will be releasing his first solo album on May 10th entitled ‘Instant Exorcism’ via Negative Gain. ‘Instant Exorcism’ is a dynamic fusion of post-punk atmospherics, industrial dance beats and dark dystopian electronics along with Mackey’s charismatic and hypnotic vocals.

“This record for me is like a personal exorcism. The songs had to get out of my system. Working from a solo project perspective presented an opportunity for me to write with a clean slate, to broaden the brush strokes and create something that represents where I am at today. Influenced by the past and all the experiences of my life to this point but not constrained or obligated to it,” explains Mackey.

Torched Magazine is honored to have the opportunity to ask Curse a few questions today about his inspiration behind ‘Instant Exorcism’, working with such artists as Martin Atkins / Pigface and My Life With The Thrill Kill Kult, and filling in for Peter Murphy at the last minute during the final date of his ‘Ruby Tour’ celebrating  the 40th anniversary of Bauhaus in Orlando,FL.. and more!

‘Instant Exorcism’ pre-orders can be made via Curse Mackey’s bandcamp here.

What was your inspiration behind your forthcoming first solo release ‘Instant Exorcism’?

The inspiration behind my first solo release is everything that I have experienced to this point in my life. I was feeling very compelled to complete an album as I’ve been performing as a solo entity for a couple of years and that has led to the natural course of creating a new album. I love playing shows and being in a live music environment either on stage or in the audience. Doing the one-man band thing has allowed me to travel light, more affordably and to take advantage of new opportunities that a full-band ensemble may not be appropriate for. This is what I want to do and where I want to be and the sound of Instant Exorcism is an excellent launching point to get out there and share the music and it’s a summary of where my head is at creatively today. Just spinning away, exorcism style. I feel that this is a very appealing record, made with emotions that will resonate with a diverse audience. It exists in the here and now, although it may seem otherworldly, surreal or sci-fi at times.

Did you grow up in a musical environment? When and where did it all start for you?

There was always music around our house. I grew up in San Antonio, TX. My grandpa was always playing the Outlaw Country legends like Merle Haggard, Johnny Cash, Willie Nelson, Hank Williams Sr. My dad with his 60s and 70s classic rock vinyl collection which we still have. Even those memories of dreary days of Sunday church choir are still with me. Somewhere my mom has a photo of me at the age of 5 in front of the TV holding a Lego-like microphone stand that I built. So I’ve been into it a while, haha!

How would you describe your experiences working with Martin Atkins and Pigface?

I’ve learned a lot about the independent music business world working with Martin Atkins. I have a blast playing music with him. I’ve known Martin almost 20 years. My first band, Evil Mothers was signed to his label INVISIBLE Records, which brought its own sustainability issues to both label and band. Playing in Pigface is a challenging, physically exhausting and potentially dangerous place to perform. Which can be quite entertaining and enthralling.

Atkins announced that Pigface would tour again for the first time in fourteen years with thirteen dates scheduled for the East coast and Midwest in November 2019.Will you be joining Pigface on this tour?

I’ve played a lot of Pigface shows, every tour since the beginning of the 2000’s including the last show in 2016 at House of Blues Chicago. As for the 2019 lineup, I have several tours staring at me right now and I need to see where all that leads. Pigface is always something to see, it doesn’t require any specific member. It’s a mysterious spectacle regardless of lineup and the fans are the best part of a Pigface show anyway. 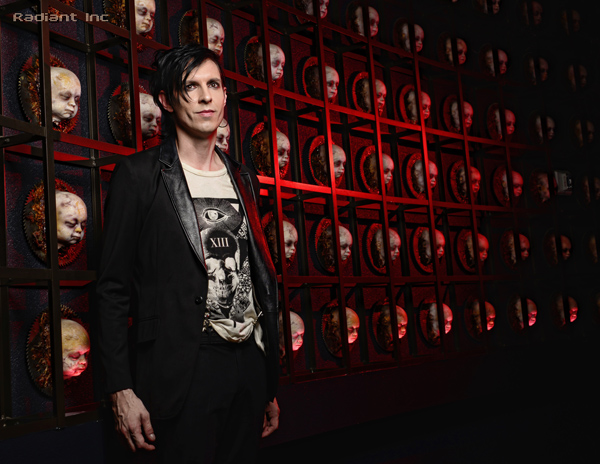 You are also a periodic member of My Life with the Thrill Kill Kult. How would you describe your experiences working with TKK? Do you foresee yourself working with them again or will you continue on more of a solo path?

Well, TKK are quite special on multiple levels for me. Touring with them is fantastic fun. Franke Nardiello aka Groovie Mann is one of my best friends, more of a brother, as is Buzz McCoy. I really admire these guys for the creativity and that they are still making it happen true to form and concept 30 years on- that is very inspiring. I’m always down to work with TKK and am quite honored that they invited me to go out on tour opening for them. Although I’m focused on Instant Exorcism right now, I am always interested in future collaboration.

On April 4th you filled in for Peter Murphy at the last minute during the final date of his ‘Ruby Tour’ celebrating the 40th anniversary of Bauhaus in Orlando,FL. What was your first thought when David J asked you to fill in at the last minute?

Well there is nothing to do in that situation but say yes and make it fucking work. Both Rona Rougeheart of SINE and I didn’t even hesitate to help. It was a mind blower. Evil Mothers used to play some Bauhaus covers for fun so I was uniquely prepared, at least subconsciously to give it a go.

Truly transcendent because there was no time to prepare, we were thrown into the fire collectively under David J’s guidance to do something special specifically for the well-being of an audience who was hurt, disappointed and angry. It was a little daunting as an unrehearsed band essentially doing a live reinterpretation of Bauhaus tunes, but we all bonded quick on stage and, well, it was just a fucking blast. I think it’s going to lead to something more. I appreciate Mr. Murphy’s post-event words and wish him happiness and good health. David J is a class act all the way.

Reading, drawing + painting, cooking, skateboarding, driving my 72 Mach 1 with the sweet, beautiful Rona Rougeheart in the passenger seat and spending time with my favorite people is what keeps me going beyond the music. I also get inspired seeing other people do cool shit in the face of adversity.

Are your lyrics generic or based on real experiences? Can you explain your process in creating a song?

In terms of Instant Exorcism, lyrically, there are real-life and fictional characters, environments inspired by true-life experiences, supernatural and religious occurrences, romance, truths, half-truths, confessions, crimes and distortions of reality as seen through the eyes of the fucked up individuals in the lyrics, which at least a few of those are me. How that begins is different with each song, but typically I starts with a simple beat at a specific tempo and a few noise loops or melody and I build from there.

I just want to thank Torched and anyone who has read this far. I appreciate your interest in my music and art! Please get a copy of INSTANT EXORCISM and come out to see the live show as I think that’s the best way to experience my music. I also encourage you, the reader, to be creative and make a positive contribution to your local arts community wherever you live. Have a phantasmic day!

Mackey will be opening for Industrial Dance legends My Life With The Thrill Kill Kult on their Strange Affairs tour starting in Las Vegas on May 5th.

*Supporting My Life with the Thrill Kill Kult 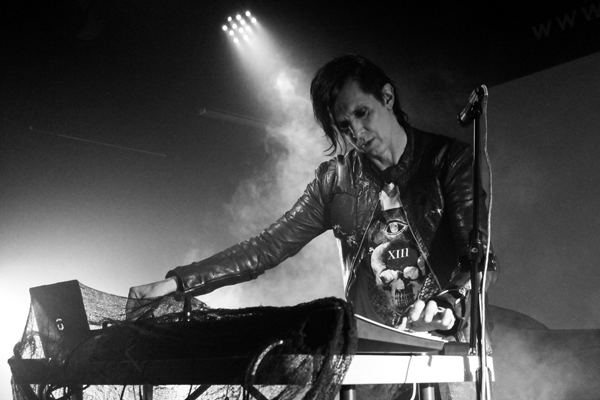 Photo courtesy of Fade In PR

Instant Exorcism was produced by Curse Mackey and Chase Dobson (Tycho, Black Tape for a Blue Girl) with additional recording sessions with Charles Godfrey who engineered the last two Yeah Yeah Yeahs records and has worked with …Trail of Dead, Explosions in the Sky and co-produced SINE’s recent release, INSOMNIÆ.

The album was mastered by Stephen Seibold who has worked extensively with Mackey as members of Pigface. The first two singles, O’ Blasphemy and After You, Destruction off Instant Exorcism can be heard and pre-orders can be made via Curse Mackey’s bandcamp here.

Keep up with Curse Mackey