Minneapolis-based trio Autumn have commenced their North American tour in support of their third full-length album ‘Chandelier’, out now via Chicago’s Sett Records. This record follows on the trail of their three-track single ‘The Fall’. The tour runs through to Saturday, September 1, where the tour winds up in Chicago.

In their 20 plus years, Autumn has always made a big sound. That very sound landed them the opportunity to tour with legendary 4AD artists Clan of Xymox on their latest North American tour.

Autumn is Julie Plante (vocals), Jeff Leyda (bass), and Neil McKay (guitars). Formed in 1994, autumn creates haunting melodies that get the listener to feel something deeply. The band took an extended hiatus after releasing two albums on Tess Records – ‘The Hating Tree’ (1996) and ‘Return to the Breath’ (1999), with accompanying tours for each album.

“When Autumn played our official “last show” in April 2010 in support of our dear friends in Faith and the Muse, we imagined we would go through a period of grieving and then just move on with our lives. It seemed it was time to take a break. We each were going through very painful breakups in our lives, and were exhausted from trying to keep it all going,” says Autumn vocalist Julie Plante.

“Turns out, moving on meant finding our way back to each other, and in the process, finding out that what is broken is never really gone. What falls apart can be put back together, not the same as it was before, but into a whole new creation. Chandelier is ultimately a work of celebration, built out of all those broken pieces, built from all those broken places. The story It tells is really everyone’s story, that joy and pain are inevitably entwined in a life well lived.”

Time and fortune eventually brought them back to the source. In 2016, they re-connected with William Faith (Faith and the Muse, Christian Death, The March Violets, The Bellwether Syndicate), who had produced their debut album. The result is ‘Chandelier’, Autumn’s new album of 14 new songs, written and developed over a 20-year period. Here we find an impressive range of mood, style and atmosphere. Neil McKay’s signature guitars lay melodies atop Jeff Leyda’s solid and nuanced bass. Julie Plante’s soaring vocals bind the entire work in place with a powerful lyrical narrative of love, loss, hope and resilience. 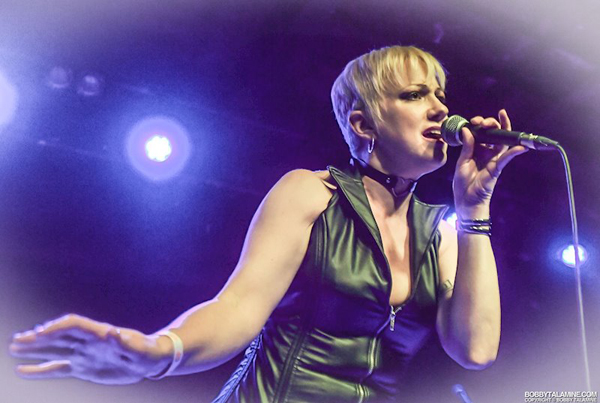 “This release is about transition, both for the band’s sound as well as our personal lives; love, loss, hope. The sound is more refined yet diverse in delivery styles. It appears the band had a few more things left to say, and our voices seem a little more confident this time around,” says bassist Jeff Leyda.

Between the lost promises of summer and the bitter austerity of winter lives the time between; the shorter, pallid days, the dying leaves, the melancholic reflection of time as it passes… This pensive time between has been evoked and pondered in the words of poets ranging from Yeats to Keats, and once again it finds sublime expression in the lush, passionate, melodic, dark pop of Autumn.

Autumn ‘Chandelier’ is now available through most online stores and streaming platforms, including their own Bandcamp. More detailed tour information and links to tickets can be found via the band’s Facebook.