Some songs instantly resonate on a more emotional level, such is the case for John Fryer’s Black Needle Noise with ‘La diosa y el hombre’ featuring the ethereal vocals of Tijuana favorite Azzul Monra (Madame ur y sus Hombres). Even though Azzul sings the song in her native Spanish, language clearly has no barring on how the listener interprets it’s meaning or feeling. It starts off with a real bang flying through the heavens and takes you back down to earth like a feather drifting in the wind. The deep seeded emotion eventually gets planted back on solid ground leaving you wanting more.

“I like to keep people guessing as to what will be released next, not only with sound but now with what language the song will be in,” explains Fryer about his revolving door of vocalists. “I love where Azzul Monraz has taken this song; it’s always surprising when I get the vocals back to hear where the music has taken them.”

Madame ur y sus Hombres are known throughout Tijuana and the surrounding area for their innovative and distinctive sound along with highly electrifying performances.

For those who do or don’t know, John is a multi-platinum selling record producer and musician. Starting in 1980 at London’s Blackwing Studios, he worked for some of the most prestigious indie labels at the time like 4AD, Mute, and Rough Trade.

He has produced and worked with many influential artists for which the list is both extensive and impressive including; Cocteau Twins, Depeche Mode, Wire, NIN and Love And Rockets. John was also a long standing member of Ivo Watts-Russell’s ‘ This Mortal Coil and has had his own bands over the years including; DarkDriveClinic, Muricidae, Silver Ghost Shimmer and now Black Needle Noise. 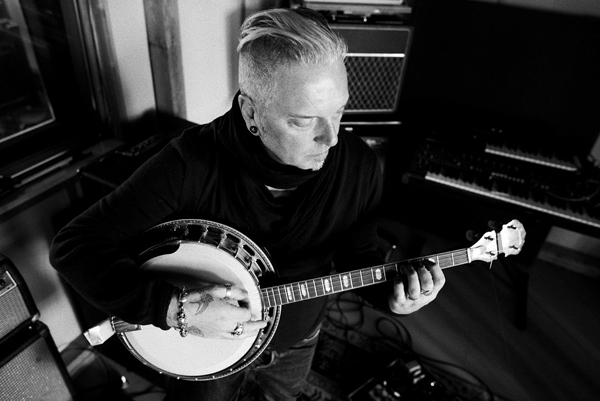 When asked what their influencers are, many musicians today include a list of bands that John has worked with. “It’s very flattering and I’m very honored for them to say that.” “I hope people will be saying that about Black Needle Noise too,” John says. Over the past two decades, John Fryer has also produced several film soundtracks, including Se7en, Clerks, Johnny Mnemonic, Mortal Kombat, Faust and Resident Evil: Apocalypse.

Black Needle Noise is also gearing up for the release of the three-track 7” vinyl single “I Am You” on May 20, 2018. Featuring vocals by Dr. Strangefryer on the industrial-leaning title track “I Am You,” the single also features Bill Leeb (Front Line Assembly, Delirium) on “A Shiver of Want” and Tara Busch on “Under My Skin.” It is available for pre order via No Devotion Records.