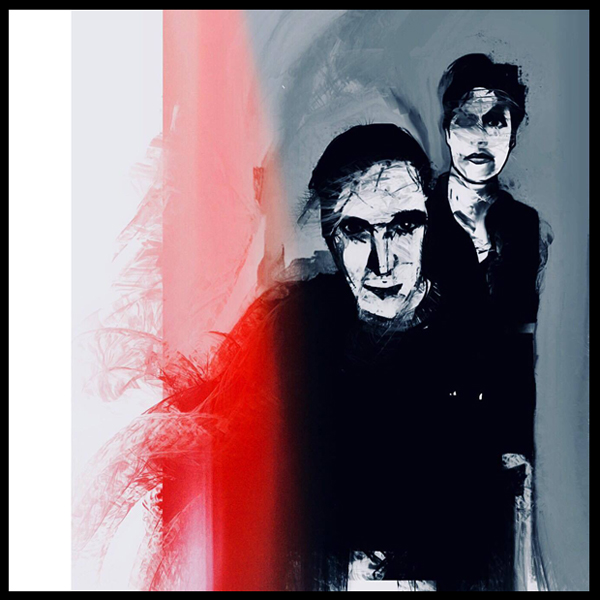 British duo Mary And The Ram recently announced their debut single ‘The Cross’ via Anonymous Records along with the b-side ‘The Dream’. Upon giving it a spin, I instantly found myself whirling in a post-punk vortex reminiscent of Nick Cave and Bauhaus. ‘The Cross’ starts off with steady ascending beats accompanied by Kiran Tanna’s deeply haunting vocals. It feels like I’m walking through a dark alley as the wind and rain kick in from an impending storm. On the b-side ‘The Dream’ slows down as it takes you into a dark and dreamy soundscape.

Produced by the legendary John Fryer, who has produced or mixed a massive number of seminal artists, including Depeche Mode, Nine Inch Nails, HIM, Love and Rockets, and Cocteau Twins, this new single delivers passionate, cathartic, concept driven electronic rock.

Based in York, Mary And The Ram is Kiran Tanna (The THING) on vocals, guitars, keys and programming) and drummer Dom Smith (Seep Away, The THING). Kiran’s background is mainly in dance, poetry and performance art, having founded the internationally-touring dance company VIAPerformance. Dom is involved in numerous musical projects and is also a potent force in the music community as editor of Soundsphere Magazine.

“We’ve known each other for years,” says Kiran Tanna. “It took a few years for our schedules to align but eventually I started programming and playing synths with one of Dom’s existing bands – a far doomier act called The THING! It wasn’t long until we realised that our shared love of old-school industrial, arty-punk and dark, gritty electronic rock needed another outlet.”

“There’s nothing new under the sun – but that’s part of the challenge. And ultimately it doesn’t matter. With Mary And The Ram we’re trying to find uncommon territory and to work there – to do something innovative if we can, and to make something that you can come back to over and over again – we hope – and each time find something new. We want you to feel. And we want to feel with you. In a room. Your room or ours. On stage. In the pit. Wherever. The increasing digitisation of our lives binds us more and more closely together… But in so many ways we are growing farther apart. This stuff comes from a place that is drifting and uncertain and perhaps a little doomed.”

Kiran Tanna comments on this first track: “The Dream is like a hallucination. It’s an attempt to capture that feeling – that thing that spreads a little more every day – something that will not go away. And then to ritualise it. It is a shadow of the character I am writing about… But that character is only me in another place and time. At the bottom of it. I am all these people. And some of the electronic bleakness of the sound – and later the aggression – comes out of an attempt to tell a story about where I am creatively and emotionally at the moment. And a desperate attempt to reach out to whoever is on the other side, listening. Maybe it’s a cry for help… If it is, it doesn’t really hope for answers.”

‘The Cross’ single is available for pre-order via Bandcamp. Towards mid-2018, Mary and The Ram also plan to release their debut EP and we can also expect news regarding live performances in the new year.