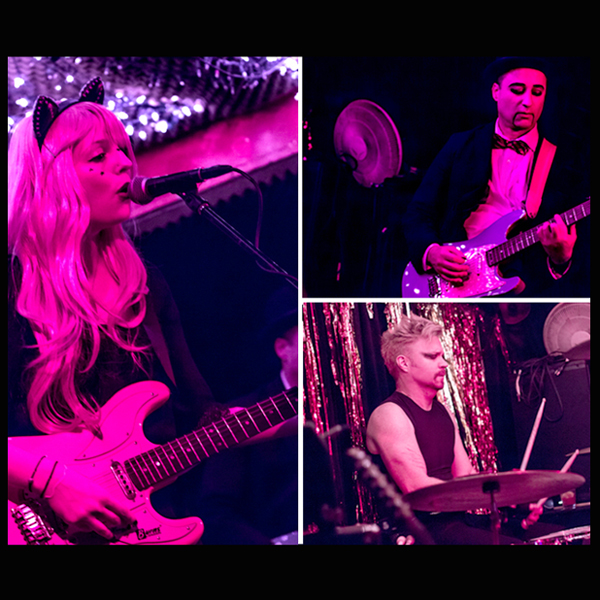 Torched Magazine was delighted to recently premier 68creep’s debut LP ‘Goodnight, Sweet Betty’ inspired by the Great David Lynch “the Renaissance man of modern American filmmaking”(AllMovie). We are now pleased to also have the opportunity to interview Patrick Casey, drummer for 68creep. His answers quickly bring about a  whole new dimension to an already “creepy, edgy, and whimsical ride.”

There is no doubt that Lynch’s influence hovers overhead like a smoke filled room as the band reaches deep into that dystopian industrial wasteland for ideas. They even goes so far as to use the mantra “What would David do?” when they hit a roadblock or need ideas. The album’s name ‘Goodnight, Sweet Betty’ is derived from a quote from Lynch’s film ‘Mulholland Drive’. 68creep also has a very Lynchian backstory with John McRandle and Patrick Casey meeting at a New York advertising agency, as they were both marketing drugs designed to combat schizophrenia.

The first single ‘Stone Cold Kiss’ kicks off the album with all the deeply surreal twists and turns that you would expect from Lynch inspired music with sounds somewhere between The Cramps and Black Rebel Motorcycle Club. John McRandle’s earth moving baritone guitar drives you into the ground as the haunting vocals of Kimberly Seewald tells the horrific tale of murder in the middle of the night. Colyn Hunt anchors the deep rhythmic foundation as Patrick Casey’s raw pounding percussion takes you to dark and strange yet somehow inviting places. “I realized the song Stone Cold Kiss touches on, among other things, the murder of Nixzmary Brown, a seven year old from Brooklyn. But I didn’t know it had anything to do with her when I wrote it. Strange how you realize these things in retrospect” says Patrick Casey (a.k.a. Catspacey). The follow up track ‘Black Cat’ is sure to make your spine tingle as it slowly and seductively pulls you in by a dark driving force from the outer reaches of your imagination. ‘Goodnight, Sweet Betty’ is strangely magnificent in all of it’s weird tantalizing beauty.

“This album wouldn’t have sounded like this if it weren’t written in New York. We are always talking about how a relationship with New York is love/hate. And it’s a real relationship. This environment is gonna seep into your songs, like an ex lover might slip into a dream. Whether you want them there or not,” says Casey. “To me, New York seems to be constantly saying, ‘I’m gonna hook you up with the most talented, mind-blowing people on the planet. But don’t look for a happy ending here’…”

Torched Magazine is pleased to have had the opportunity to sit down with Patrick Casey, drummer for 68creep to ask a few questions about being inspired by David Lynch, diving into their unique sound and the process of making music and getting it out there with their latest release ‘Goodnight, Sweet Betty’…plus more!

TM – Hi Patrick – How would you explain your sound to a new audience?

Patrick – Well, I think a lot of it’s in the band name, actually. When we first got together we were bashing things out, trying to find the right sound. We had a song by our guitarist that was in a 6/8 time signature. It had a cool, dark, swing to it that we loved. It just kind of lumbered, and tumbled, and crept along. I had to give the song a placeholder name so I just labeled it “68creep”. And it fit.

So that more or less describes us. We’re getting into some faster tunes lately, but they still have that creepy, edgy, whimsical vibe. So as our sound evolves, the name still fits!

Patrick – I like finding musical influences that are pretty far removed from the sound of our band. There’s a song I wrote called “Androgyny’s a Bitch”. The working title was “Freaky Priest” since the original inspiration came when I heard a Rick James song at one store, and a Judas Priest song at another while I was thrifting that day. “Sarina Said” came from “Plan A”, a Dandy Warhols song, and “Black Cat” from Jane’s Addiction’s “Whores”. In most cases, our tunes couldn’t sound any more polar opposite than the songs that inspired them. And that’s really the way I like it.

TM – What is that one thing about David Lynch that inspires you the most?

Patrick – Besides that killer hair?

Well, to be honest, number one is how he instantaneously creates an atmosphere. Say one of his films is on cable. I’ve never experienced someone walking into the room saying: “Who directed this?” It’s David Lynch. There’s no question, and you’re immediately in another world. That’s not easy to do, but we strive to create a certain ambience from the first note played. I think the intros to “Watch You Fall” and especially “Stone Cold Kiss” achieve that.

Patrick – My ex-girlfriend and I were writing songs, struggling to get on our feet and get some stuff recorded. We couldn’t seem to find a guitarist who could pull off a riff that we desperately needed to finish a demo.

Someone had told me that this kinda twisted vaudevillian character that worked at my ad agency was pretty great on guitar. Then I realized it was the same guy who loved to assault defenseless coworkers with bad jokes, myself included.

With my luck, the agency ended up pairing us up to create a video to help market drugs to schizophrenics. The film we made simulates all of the tics, hallucinations, sights and sounds of someone in the throes of an episode. I guess the powers that be figured the two of us could relate to a hardcore mental illness.

Anyway, John pulled off the guitar riff and from there I couldn’t get rid of him!

Patrick – I think if you aren’t a native, and maybe even if you are, it’s self-explanatory, right? It’s the best of times, it’s the worst of times! You’re gonna get that with so much humanity crammed in one city. I’ve definitely never met so many talented people in one place.

But you’ll also witness things like people breaking out their lawn chairs, beer, and a bag of chips from the bodega to gather around a lone weed growing through a crack in the sidewalk. There you have it. A New York picnic! Let’s just say that sometimes I jones for mother nature while living in a concrete jungle.

And with New York, it’s really like having an additional member in the band with all of the joy and all of the horror that a human brings. This place colors our sound. There’s no denying that.

TM – Explain the process of making music and getting it out there with your latest release ‘Goodnight, Sweet Betty’.

Patrick – Well, I can’t speak for our singer Kim, who wrote a great song called “Birthday”on the album. But what I usually do is get a counter melody stuck in my head that’s inspired by another song I hear. Since I’m but a simple drummer boy, I summon John’s help on guitar to exorcise the sounds in my skull and channel them into an actual song.

I actually hum and sing out the different parts to him. He’s a great conduit and interpreter. And a great player. It took us a while to get this kind of telepathy in place.

I’m now building that same kind of symbiosis with our bassist Colyn, who I’ve known longer than anyone in New York. The rest of the band is writing more on our next album, which is exciting. So the process will continue to change, I’m sure.

For this release, we have the amazing, invaluable assistance of Shauna McLarnon at Shameless Promotion. What a great name for a PR company, right? She is tireless and has really helped us to spread our carny creepcore far and wide!

Patrick – I love doing design, and writing, both of which I used to do for a paycheck. I love stand up comedy, documentaries, and I’m always up for some guilty pleasure gore with shows like Forensic Files and the Investigation Discovery channel. I also like baseball. It’s relaxing. But it seems to send most of my friends running away! They say it’s slow and boring, but the strategy feels like chess to me.

TM – Are there any current bands you’ve been enjoying that you can recommend us for our own playlists?

Patrick – Well, Holy Boy, LoveHoney, Twin Guns, Weird Dream, and Window & Orange come to mind. They’re all great. Some of them have played with The Creep. They’re from different genres and have cool sounds that vary pretty widely. Definitely check ‘em out!