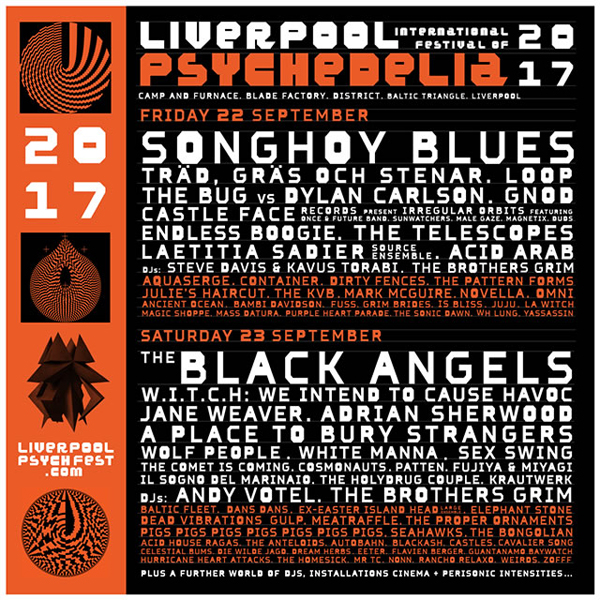 Turn on, tune in and join the 2017 Liverpool International Festival of Psychedelia (a.k.a. Liverpool Psych Fest or PZYK). The two-day festival kicks off on September, 22 and features some of the worlds greatest psychedelic music both live and DJ sets. Get into the groove with this mind expanding sonic explosion along side a multitude of activities including; a pre-festival exclusive show headlined by New Jersey’s Ducktails (Real Estate guitarist Matt Mondanile), a film programme, daytime events, exclusive new virtual reality installations, an immersive late night audio visual experience, an opening party and launch events, and a month long art exhibition that supports this year’s aesthetic.

With so many great musical acts at this years Liverpool Psych Fest, we decided to pull of few of our favorites together for your listening and mind expanding enjoyment…

A Place To Bury Strangers – You Are The One

CaStLeS are Dion Hamer, Cynyr Hamer and Calvin Thomas from North Wales. Songs inspired by the surrounding wilderness of their studio, which sits high overlooking two castles. Their infusion of psychedelic rock, blues and dance grooves has been lauded by BBC6 Music’s Tom Robinson, BBC Radio Wales and Radio 1.

Calling their distorted, amped sound “drug punk,”Cosmonauts are a California-based garage punk band known for their simple, physically powerful songs and punishing stage volume. Cosmonauts were formed in 2009 by guitarists Alexander Ahmadi and Derek Cowart, natives of Fullerton in Orange County. They met when a mutual friend staged a house show and the two ended up jamming together….(allmusic)

Ducktails is the solo project of Matthew Mondanile, a founding member of Ridgewood, New Jersey-based indie beach bums Real Estate. While not too dissimilar in tone from the sun-kissed pop of his main squeeze, Mondanile’s work as Ducktails presents a more fragmented, mercurial version of the Garden State of mind. More synthetic, too, thanReal Estate, Ducktails is all burbling analog synths, bedroom processing, and sunburnt soundscapes. The end effect acts as a sort of bleary aural Polaroid taken at a backyard partyReal Estate just finished playing….(allmusic)

The name is a partial misnomer. Though the band hails from Los Angeles, they do not partake in any sort of witchcraft. Yet their ability to conjure a specific time and place through their sound does suggest a kind of magic. On their eponymous debut album, L.A. Witch’s reverb-drenched guitar jangle and sultry vocals conjure the analog sound of a collector’s prized 45 from some short-lived footnote cult band. The melodies forgo the bubblegum pop for a druggy haze that straddles the line between seedy glory and ominous balladry; the production can’t afford Phil Spector’s wall-of-sound, but the instruments’ simple beauty provides an economic grace that renders studio trickery unnecessary; the lyrics seem more descendent of Johnny Cash’s first-person morality tales than the vacuous empty gestures of pre-fab pop bands. This isn’t music for the masses; it’s music for miscreants, burnouts, down-and-out dreamers, and obsessive historians. (Suicide Squeeze)

The music of L.A. Witch is experimental and raw. (LA Weekly)

The sultry neo-psychedelic sound of the Black Angels came together in spring 2004, taking their name from a Velvet Underground classic, “The Black Angel’s Death Song.” Hailing from Austin, Texas, the band is comprised of Alex Maas, Christian Bland, Kyle Hunt, Stephanie Bailey and Jake Garcia. (The Black Angels)

Loop was formed in Croydon, London, 1986 by Robert Hampson (vocals/guitars) and partner Beki Stewart (Bex) on drums. After finding Glen Ray on bass, through an advert in Melody Maker, they began to perform live and were quickly signed to HEAD Records run by Jeff Barrett (Heavenly) who released their feedback-drenched debut 12” 16 Dreams.

The band managed to hypnotise all with their discordant trance-like spell which served as an antidote to the prevailing trend in British pop at the time – they resurrected the concept of loud out there-rock for a new era, creating droning soundscapes of bleak beauty and harsh dissonance, loosely influenced by bands such as The Velvet Underground, The Stooges, The MC5, but retaining an avant-garde and experimental edge from Can, Faust, Neu!, Rhys Chatham, Glenn Branca and minimalist systems music, to name but a few.  Live shows were revelatory, Loop, allowing LOUD as an constant descriptive term, they pushed PAs to the very edge of their existence, creating a sonic pummel not really experienced since. (Soundheads.org)

We can hardly even speak the name “White Manna” without the words expanding and disintegrating into the vast, unending echo of space, our eyes pin-wheeling in unbalanced wonder, our ears the valiant veterans of the endlessly amplified assault of this cosmic, California-centric caravan. (revolt of the apes)