As a music photographer back in the early 2000’s, driving down to L.A. every weekend into the middle of the indie music scene was not unusual, in fact it was a given. There was nothing like that late night warm hum of the city’s hustle, where bands would be coming and going from the venues, equipment and instruments loading and unloading with patrons looking on. I was always on an insatiable quest to find and document the next up and coming talent. During this time, one such band caught my eye in particular, Toggo Ultrarock’s first band ‘Scared Of Girls’. It wasn’t the band’s lead singer, Norwegian rocker’s colorful hair and glam rock style but their unique catchy upbeat rock tunes that kept me coming back for more. They quickly established a loyal following and soon found themselves playing to high-energy full houses through-out the Hollywood area.

They were well on their way to breaking out of the underground when suddenly everything came crashing down, Toggo literally disappeared under mysterious circumstances only to re-emerge 8 months later in Minnesota. This strange occurrence caused him to loose everything he held dear; his band, home, car, bank accounts, money, and his hard earned name in the Hollywood music scene. 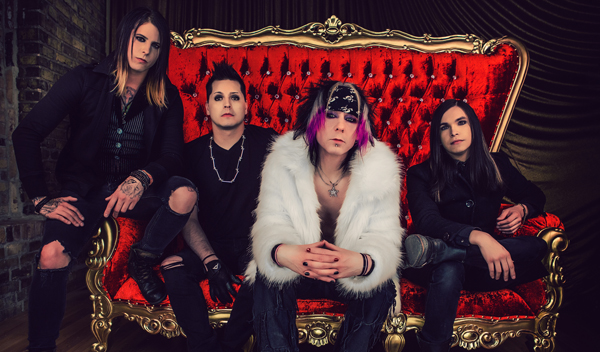 Toggo, who now goes by Toggo Ultrarock, is hands down one of the hardest working and talented musicians that I’ve ever had the pleasure of documenting. His missing years seem like a blink of an eye as he steps back in the game with his latest release ‘Ultrarock’ (EP) through Norwegian Deepfrost Productions. He continues his path of success with a revamped sound of electronic inspired rock that has been previously coined as EDM Rock, a new genre for a unique sound.

TM had the opportunity to sit down with Toggo Ultrarock and chat about his latest release, the early days with ‘Scared Of Girls’, the first single and video for ‘Cannonball’, and his mysterious disappearance from L.A… plus more…

TM – Who or what are some of your inspirations for creating music.

Toggo – Well, there’s inspiration for writing music and then there’s musical influences. Speaking for the former, it mostly comes from one out of two things: Emotions I feel, and songs I hear on the radio.

When I’m going through something personally (good or bad), that often sparks my best material. Likewise, if I hear a song on the radio (usually something brand new), that also inspires me to take what I hear to a whole new level, ‘put it in the oven’ so to speak, and create a whole new thing out of it.

TM – What is the story behind your new song ‘Cannonball’?

Toggo – Cannonball tells the story of a night when I met a girl and fell in love. I usually don’t write literal lyrics, but that one is the exception, as the whole song is a play by play of what happened on a fun, drunken, cold December night a few years ago.

TM – How would you describe your sound to a new audience?

Toggo – I’m going to go with what the press has already coined my sound as: EDM Rock. I love that label, because it fits. My blood runs thick with rock n roll – I will always be a rock singer, but I also love EDM, so my sound is a marriage between the two.

TM – You were in L.A. during the peak of former band ‘Scared of Girls’ success, what happened to you that literally made you fall off the face of the map?

Toggo – I always have a hard time telling that story because it’s so involved, but the short of it is that I was pulled into a surreal experience that I thought was real, but as it turned out, was not what it seemed. Think total brainwashing. I lost everything, including myself. But the great thing is that, because of that experience, I have grown into someone I otherwise never would have become, and I’ve achieved things I’m so proud of, because of what I learned from it.

TM – What are some of your fondest memories of working and playing live in L.A.?

We chose after, as we figured that’s when the real party started. It wasn’t. Everyone left, haha! By the time we went on there were less than 10 people in the audience. But the crazy thing is that two of those people, standing together by the stage watching us the whole time, approving nods and all, was Rick James and Lemmy Kilmeister.

After the show, Lemmy came backstage, walked up to me, grabbed my hand and shook it, and said “I love your band, really great stuff; you’ve got something special there kid, don’t give up”. I mean, Lemmy said that! To me! Red latex pants, a pound of makeup on, dyed spiky hair and all, it kinda was the last thing I expected from him, so when he said it, it was like the most awesome moment ever, I’ll never forget it

TM – How did you hook up with Deepfrost Productions?

Toggo – A friend of mine was doing a local charity for a children’s hospital in Tromheim, Norway. He had a song which he got a ton of local musicians to perform on, for the charity. He asked me to sing a couple of parts, which I did.

Deepfrost Productions volunteered their time to produce and mix that song, and when they heard my vocal parts, they were all “who is that?!”. Long story short, I ended up getting a deal out of that with them, and here we are with a brand new EP as a result.

TM – You’ve always been a hard working musician and a true inspiration to watch. What kind of advice can you give musicians that are just starting out?

Toggo – Why thanks, that means a lot. The best advice I can give is this: Be true to yourself, and never, ever, ever give up on your dreams. I see so many people selling out, trying to do a sound that they think is the ‘right one’, or one they think will get played on the radio.

Fuck that. First of all, if you do that, your chances of succeeding are extremely low, contrary to popular belief. Secondly, you will be so much happier with yourself if you create and play music from your heart. And your fans will love you that much more for it.

TM – How old were you when you first started coloring your hair? Do you do it yourself or is it professionally done?

I’ve been dyeing it since I was 16. I do it all by myself. I remember the first time I did it, I was hanging out at my friend’s house and we both dyed our hair jet black. I didn’t come home till after my family had all gone to sleep, and I woke up from my mom and my sister peeking through a cracked door, eyeballs the size of dinner plates, looking all kinds of worried.

Turns out my mom had asked my little sister to go wake me up, but instead of seeing my blonde locks like she was used to, all she saw was the back of my freshly dyed jet black hair. She freaked out, thinking someone had broken into the house the night before, and fallen asleep in my bed, so she got my mom to come check, haha.

They didn’t breathe a sigh of relief until I turned around and they saw that it was me. At which point my mom started yelling at me for having dyed my hair black, lol. Good times.