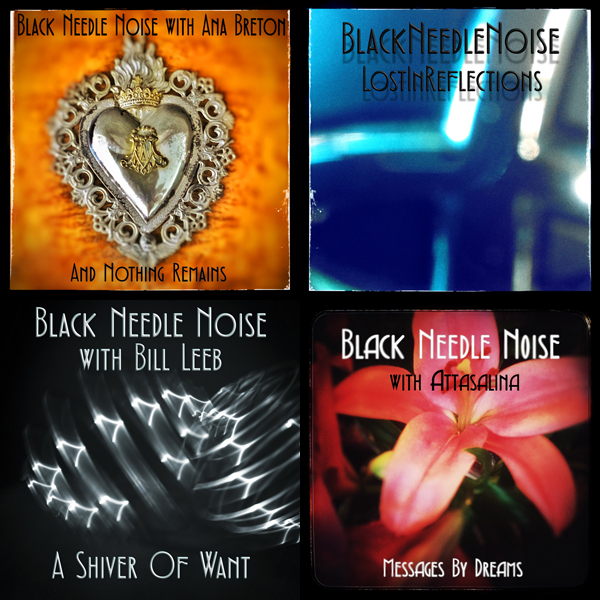 This playlist explores just a few of the many Black Needle Noise collaborations.

Black Needle Noise With Ana Breton ‘And Nothing Remains’

“As soon as I heard the track I thought of that feeling of where you are in a dream but you don’t know it’s not waking life. I have lots of dreams that are like M.C. Escher landscapes that don’t make any sense where I might be running through stairwells but but then opening a door and free-falling into a gigantic room. The slow space of this song made me imagine being in a strange alternate reality like the Upside Down or like being inside a gigantic floating bubble and pressing the walls like skin that stretches but doesn’t pop. For me it takes place in the time of a groggy haze of a very late night or very early morning.”

“The song takes me to many places at the same time and I like to say it means “all the things”. It was very much about what was going on in the period of time it was being written but also about difficult situations from the past, trying to unravel it in the present and also looking to the future.” ~ Ana Breton

‘Neon Noir’ is a new single off the the second  Black Needle Noise  album titled ‘Lost In Reflections’ with vocals by Dr. Strangefryer himself. The song instantly injects you with an impressive dose of what John Fryer is made of! It’s core is reminiscent of the early days of Depeche Mode where synths dominated the airwaves and the sweetness of bubble gum lip gloss was worn on every girl. Glimmers of a cold neon nightlife and rubber fetish delights playfully bounce throughout the song while Dr. Strangefryer’s voice fades and echoes from a seemingly distant dark ethereal place. ‘Neon Noir’ is poised and ready to join the magical nightlife spaces for clubbers to lose themselves in this summer.

Black Needle Noise With Bill Leeb ‘A Shiver Of Want’

“This song evokes a sense of a life passing in front of you… Perhaps walking through a moonlit graveyard at night with an early-morning dew as you visit old friends and feeling like your own life is quickly passing by. We all are trying to find a sense of resolve and mortality giving some sort of strength and not fearing a sense of life as time passes by. With thoughts of so many people that were lost over the past year, it brings your own mortality to the forefront of your thoughts.” ~ Bill Leeb

“Well, you know back the 60’s there was this passion for the idea that rock ‘n’ roll could save the world. And while for some it was actually grounded in an authentic vision, by the 80’s a certain kind cynicism had, understandably, set in. Punk, in my mind, really did continue the thread of that passion. Embracing cynicism, fear and disillusionment with wit, poetry and power and expressing the need and indeed the very process for the revolution within in one form or another. I can imagine ‘Messages By Dreams’ as the sound of this call that must be answered. Standing at the threshold of adventure, with the taste of wind in the room, knowing that one must become what is necessary for the task at hand. A rock ‘n’ roll hero saved by a dream.”

Attasalina has currently launched a Pledge Music Campaign to help fund her upcoming debut album ‘Take the Dream‘ that will be produced by John Fryer.