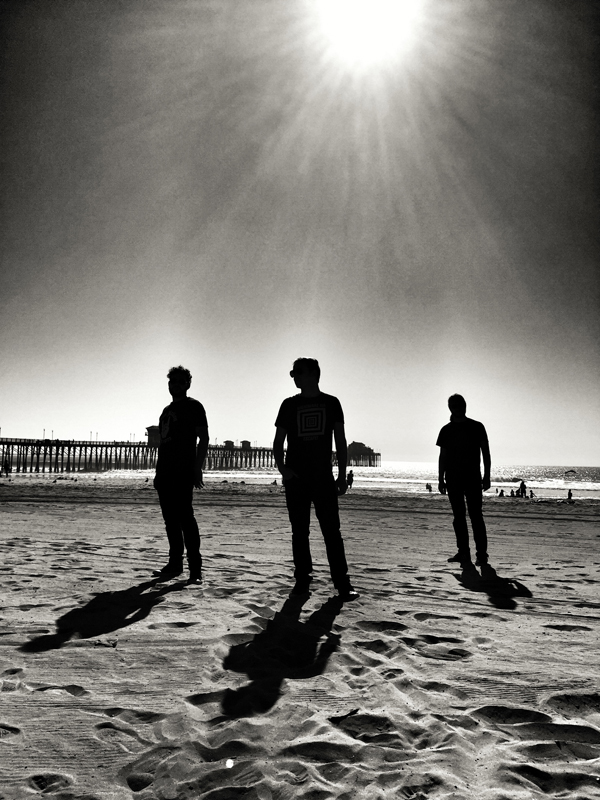 Addicted to the lure of the American highways, The Foreign Resort rolls in with ‘The American Dream’ EP which is filled with all the adventures and experiences that happen while on the road. Their sound has shimmering shoegaze glimpses of forbearer The Cure mixed with elements of Killing Joke and Joy Division. The Foreign Resort has been highly successful with a more DIY approach to touring and earning funds by way of crowdfunding that has enabled them to build real personal connections in every city that they play. “Meeting people that we connect with is a crucial part of what drives this band.” With over 400 live performances under their belt, this Danish post punk band has toured across North America and Europe and have included several festivals including; SXSW, Iceland Airwaves, Wave Gotik Treffen and the Canadian Music Week 2017.

Released on the heels of ‘The American Dream’ EP comes their latest single ‘She Is Lost’. It is accompanied by a video asking fans to help make an official music video for the single. “The concept is pretty open and simple: All footage must be in black & white. And we like it gloomy. That’s it. If you’re interested and have any questions or would like to receive the lyrics and/or footage of us playing the song, you can reach us at our email – info@theforeignresort.com – or on Facebook https://www.facebook.com/theforeignresort.”

TM had the opportunity to talk with The Foreign Resort about their adventures on the road, the production of ‘The American Dream’ compared to ‘New Frontiers’, and their DIY approach to touring and crowdfunding…plus more!

TM – I understand you’ve been successful with crowdfunding campaigns. What are some of the things you’ve been able to accomplish by raising funds this way?

TFR – First of all, thanks so much for doing this interview!

We launched our first crowdfunding campaign in the spring of 2015 after having declined an invitation to play a showcase at SXSW in Austin. We played the festival in the past and wanted to do another 3-week US tour in connection with our showcase. But we couldn’t afford the expenses for work visas, plane tickets etc. After several US tours and self-financed releases, we had run out of money. So, we decided to do a crowdfunding campaign both to raise money for three US tours but also to take our touring a step further and meet our fans in their homes. Through the campaign, you could have us play an intimate house show in your home and have us cook you and your friends a Danish meal. We always enjoy hanging out with the people we meet when on the road and this gave us an opportunity to meet them up close and of course vice versa.

The campaign was a success and enabled us to play three US tours in October 2015, March 2016 incl. a showcase at SXSW and September 2016. The tour in September 2016 also included three shows in Canada, which in turn resulted in us starting to work with a Canadian based management and playing tours and showcases at prestigious Canadian festivals in April and September 2017 (you can find the upcoming tour dates at http://theforeignresort.com/site/shows/).

The second and latest campaign was a pre-order campaign for the vinyl re-issue of our 2011 EP “The Foreign Resort”, which took place in the summer of 2016. This campaign was simpler but was still a great opportunity for us to fulfill a dream and release the EP on vinyl. We also used the opportunity and put out the vinyl re-master of the EP as a digital release, since it was more dynamic and had a crisper high end. Really a release for the audiophiles but also very much a release for ourselves. This campaign was also a success but despite the fact that money is always short, it will be a while until we do another campaign. Right now we’re focusing on recording new songs for our next full length as well as playing more shows.

In general, the campaigns confirmed to us that we have some dedicated fans out there that will support us and we are very, very grateful for that.

TM – Legendary producer John Fryer mixed and produced your 2014 album ‘New Frontiers’. Can you briefly tell me about this experience? How was it different from your latest release ‘The American Dream’?

TFR – Recording and mixing an album with John Fryer was a big one for us. It was the first time we worked with a producer that would have a major impact on our music. Until then we had been in charge of our own recordings, but recording “New Frontiers” we trusted John, even if we didn’t agree with some of his decisions. Sometimes it is healthy to get a new perspective on things and take chances and today we are very happy we did so. On top of that it was a very intense process. We recorded ten songs in ten days, working every day from 11am until around midnight. It was a thorough process that included a lot of things we hadn’t thought about before, anything from stuffing the drums with newspaper to using a microphone from 1948 for vocals. Basically, the process of recording and mixing with John Fryer taught us a bunch of things that we used when working on “The American Dream” as well as the new songs we’re currently working on including our latest single “She is Lost”, which was mixed by the band only. Recording “The American Dream” we went from the big production with John Fryer to a minimalist and very simple sound. No guitar or bass amplifiers, MIDI-triggered drums and no expensive vintage recording gear. Everything was done DIY fast and cheap and we loved the way it turned out. Raw and straightforward. On our current recording sessions we have returned to the more analogue approach, which means we will be drawing more on our experience with John Fryer, except we’ll only be working with an engineer for drums and guitar tracking. Not saying we will never work with a producer again, but right we like to have full control over how our songs will end up sounding when they’re released.

TM – With your relentless touring, chalking up over 400 shows under your belt and thousands of miles under your tires, what do you find so addictive about America’s lost highways?

TFR – We started playing shows in the United States in 2009. Did a couple of short DIY tours to begin with and over the years the DIY style of touring continued and still does to this day. This way of setting up shows puts us in touch with a lot of people that we would never have met touring like more established bands do. We have personal connections in every city we play in and this is what makes it worth it for us. Meeting people that we connect with is a crucial part of what drives this band. If we would just play shows, hang out backstage and then drive to the next city, it would be boring a hell and we would burn out. Things like the crowdfunding campaign enabled us to meet our fans up close and that continues to mean a great deal for us. This is also a call to anyone out there who comes to one of our shows: Come on up and say hello! We might be packing up our gear, but we always have time to say hello and once the gear is packed away, we’ll be back inside the venue and ready to have some drinks with you!

TM – With many hours being spent on the road, how does this affect you creatively?

TFR – Lyrically it inspired the commentary to American society on “The American Dream”. We meet a lot of people when touring, in Europe or North America and many of their stories stick with us. The United States has been a segregated country way before we started touring and hearing how people make ends meet and the conditions under which they live and work is a sad story. The same thing is happening in Germany right now. The positive side is how these people remain optimistic and cheerful when we meet them, which is very heartwarming and inspirational. As far as creating new music, not a lot happens when we’re on tour. We don’t rehearse or try out new stuff when on the road and ideas mostly pop up when shopping groceries or going about other everyday chores at home in Copenhagen. This means that we have had to cut a bit down on touring in 2017. Instead of doing two 3-week US tours this year, we’re doing two 10-day Canada tours plus about 20 European shows. We’re addicted to touring, so this was as much as we could cut it down to.

TM – Tell me about your new single ‘She is Lost’ and your “summer of love”.

TFR – “She is Lost” was written a year ago, in July 2016, when I was going through a personal crisis. Let’s just say that like the stories we hear from middle class Americans, sad personal events can also be very inspiring, both lyrically and musically. Sometimes revisiting or dwelling in sad things can create more deep felt music as well as having a cathartic effect on the creator.

TM – You’ve reached out to your fans to help make a video for ‘She is Lost’. How successful has this been for you? What should fans do if they are interested?

TFR – A little while ago we encouraged our fans to make a video for “She is Lost” since we didn’t have the money to make one ourselves. We currently have a couple of people out there working on videos but we still hope to hear from people who would like to make one. The concept is pretty open and simple: All footage must be in black & white. And we like it gloomy. That’s it. If you’re interested and have any questions or would like to receive the lyrics and/or footage of us playing the song, you can reach us at our email – info@theforeignresort.com – or on Facebook – https://www.facebook.com/theforeignresort.

TM – Who or what are some of your artistic influences?

TFR – Our inspirations come from the music we’re listening to, which changes all the time. Over the years some of the most influential bands have been A Place To Bury Strangers, The Raveonettes (their music as well as their minimal touring setup), New Canyons, Weekend (the album Jinx), Film School, Operators, Snowden, The Chameleons, Night Drive, Second Still, André Obin and of course we can’t deny that we listened to The Cure every now and then. Not so much Joy Division though.