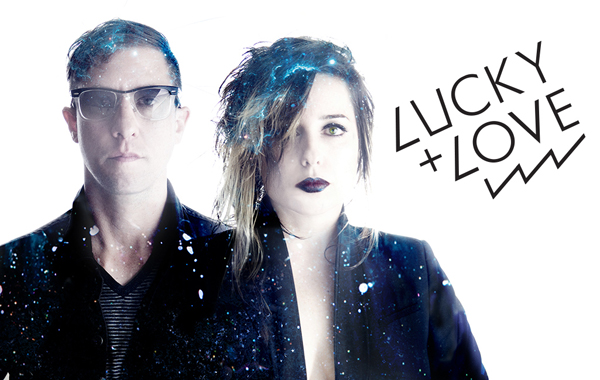 Meet LUCKYandLOVE, one of L.A.’s newest electro rock, dream pop, synth gaze bands to dig their way out of the underground. Starting in 2014, they are Loren Luck (drums, synths) and April Love (vocals, keyboards, guitar) who have been inspired by such artists as New Order, OMD, and Depeche Mode with elements of Berlin and Cocteau Twins. Their sound is uniquely theirs and in the words of Loren Luck, “lots of LFO, riveting arpreggiations, simultaneous solos via spacey square waves, with April’s smoky vocals”. The name, LUCKYandLOVE, was inspired by The Good Luck bar in Silver Lake, California where Loren and April first met in 2006.

LUCKYandLOVE’s new self titled debut ‘LUCKY + LOVE LP is set to be released June 30th via SRD (Southern Record Distributors). It’s lead off single ‘Digging in the Earth’, is accompanied by a video, directed and edited by cinematographer and animator Steve Barron.

Torched Magazine had the opportunity to catch up with the duo bringing light to their lead off single ‘Digging in the Earth’, living next to a construction site and their thoughts on an abstract philosophy of life, plus more. 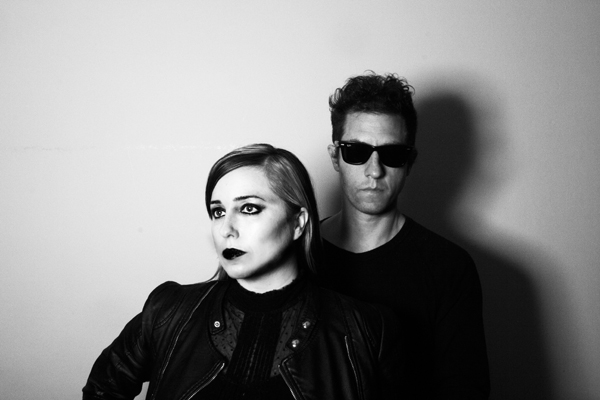 TM – Your lead single ‘Digging in the Earth’ is accompanied by a very visual video with an animated fantasyland. What is the story that you are trying to convey here?

The lyrics to the song were written as a ‘Leave the Earth alone’ type of song. Several things were happening in our world that synchronized with the lyrics.  For one, there were tractors and pile drivers moving the earth next door, but also there were many clubs in LA were being shut down for luxury apartment development. Then, there was an insane natural gas leak, an ecological disaster in Los Angeles, later in the news there was the Dakota Access pipeline protests.  Everything seemingly matched the song in our minds, but not on purpose.

But the final story for the video was a collaborative one between the band and our director, Steve Barron. We all fired off a lot of ideas over the guys’ favorite food- pizza and we brain dumped all the ideas in our head, ultimately creating a mind map mess of post-it notes on the walls.

The story it’s self is a lot like ‘Planet of the Apes’ where the animals fight back to keep their territory. I suppose the dancing underground may represent breaking out of the underground music scene too (we played a couple underground electronic shows in DTLA). The video illustrates our studio, including my grandma’s Con organ, artwork and vinyl collection that all eventually fall through a sync hole.

In real life, the property where our music studio was, did have a large crack in the driveway, and there was definitely a strange energy being chaotically harnessed!

TM – What was it like working with cinemaphotographer and animator Steve Barron?

We were in love with his other directed music video and is known for creating amazing papier-mâché big head costumes such as Hamburger Mayor McCheese and Lionel Ritchie. Actually, rumor has it Loren and Steve used to be in a band in high school where robot characters were part of the performance. We knew Steve would go over the top and we were fully aware of his stop motion style, and now he’s an animator at Disney. He never ceases to amaze us. His hard work and dedication really paid off, he’s a great visionary. We were lucky to have worked with him. By the way, he just so happens to have the same name as Steve Barron the video director of Ah- Ha’s “Take On Me” and Michael Jackson’s “Billy Jean” but he’s not the same person 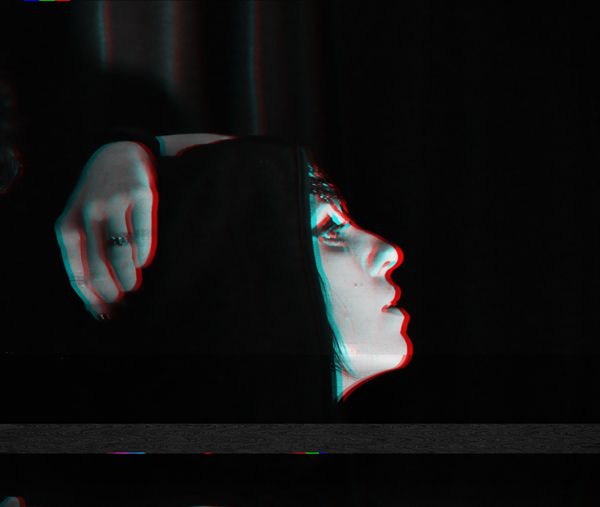 TM – Did the noisy construction site that you used to live next to in Glendale, California have any effect on you creatively?

There are songs we will have in our next (sophomore) album that were also written in the Glendale house and they are even a little spookier. There was something spiritual, soul crushing and earth shattering that happened while living there, and to be honest Loren and I are still healing from it.  I can’t say the effect was entirely a good one, it caused a lot of personal anxiety for me, but we transmuted all the stress into something beautiful, out of sheer anguish. At the time, being designers working from home, our workspace is important. Loren came home with some noise canceling Bose headphones and they were such a blessing. I kept them on all day and all night (when I was home). At a point, I didn’t want to take them off not even to even answer the phone, which certainly didn’t help my freelance career. We ended up communicating more with music, since we couldn’t stand walking around without headphones.  Loren didn’t always have a microphone set up to speak back to me, so he just drummed back. So, we just communicated through music. Being auditory people, sensitive beings Loren and I, I did spend some time researching what the hell was wrong, along with learning about the audio resonance of the new moog I was playing, why my ears were ringing (my ears are perfectly fine now), I learned about Earth’s electromagnetic field spectrum and Schumann resonances, lay lines etc. Looking back, I do wish we moved a little sooner. Despite it being a big beautiful space, we endured waking up to the 7am pile drivers I suppose to pay our dues to hold down this space we set up as a home music studio. We have paired down our gear a little so we can be lighter for a tour. The owner sold the building to developers and we had to move anyway. I am thousand of times happier now back in Echo Park right near the beautiful lake. Our place now is 1/8th the size of our spot in Glendale, but energetically it’s 14k gold. I don’t think I can ever take back the way the experience shook me shook my soul, and I’ll need a lot more music to heal from it. Rolling out of bed to walk our dog, while gazing at blooming lotus flowers, chuckling at these funny looking Muscovy ducks dancing, and giggling at people move their peddle boats under the spraying water, helps calm my nerves. It sounds ridiculous but a big part of it was simply that being uprooted forcefully if not by sound and dust but by the developer war here in LA, where everyday, beautiful old houses are being demolished, all to move into something of the same cost but 1/8 the size was devastating. We decided to get rid of almost everything we own in order to fit into our new studio, and we are perfectly happy now, but we definitely are transformed, forever. The very best part of my life now, is hearing the birds. I could care less about any material object, as long as I can freaking hear the birds. When the construction was happening, I lost the ability to hear the birds. Their trees were chopped down, and some little baby birds lost their mothers. In ‘Digging in the Earth’ I sing about ‘the building of cages to hear the wild’ it’s about how people go put birds in cages simply to hear it once and a while, when all we need to do really is let them continue to live in their trees. The multitude of wild flowers growing under the eucalyptus tree that was sacrificed for the construction in Glendale, were also gone once the construction happened. This spring was an explosion since it was the most rain LA has seen in 11 years, so the wild flowers came back with a vengeance in empty lots here in Echo Park and Loren and I appreciated all the subtle beautiful things people take for granted like wild lupines, bird calls and church bells. The gratefulness we both feel for nature certainly affects the sensitivity we have as musicians.

TM – You say that your lyrics touch many facets of an abstract philosophy of life, can you explain what you mean by this?

Well, like Taureon for example, when I was writing the lyrics, I was in my vocal booth and I meditated on this theory I heard about Sidereal time, a universal time (I had the app that kept the time on my iPhone). During my meditation, I focused on the Sideral time and the alignment with the center of the universe which helps calculate Sideral time. Also, there is this guy Daniel Vitalis who is a founder of the re-wild movement and designer of findaspring.com, who spoke about the ancient, now extinct, species the Aurochs an ancestor of today’s bull which of course who’s horned shape is represented in the sign and Taurus constellation. There is also the brightest star Alpha Tauri and the Taurid meteor showers.  I have no idea exactly what esoteric “bull” sh*t I am singing about exactly since I am not an astrologer or a scientist, but intuitively in the song I loosely explore the idea/ fantasy philosophy that the stars energy help to purify our DNA. 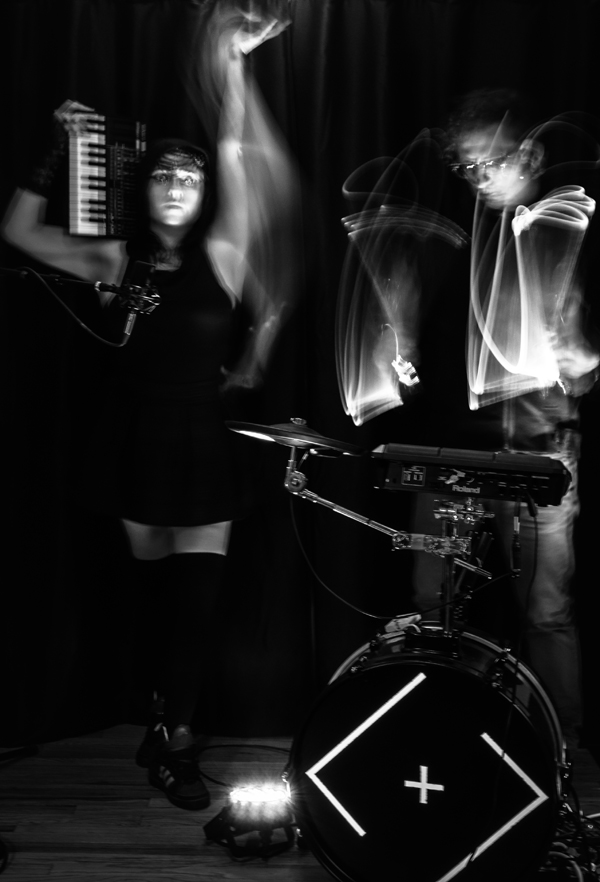 TM – Can you go into some details on the production process of ‘Digging in the Earth’? Does this process carry through the entire ‘Lucky+Love’ album?

We approached it a little differently then the rest of the songs. We wanted to inspire the dance floor at 120 beats per minute. We pushed forward the drums to drive it.  The process we decided to layer the most synths then any of the other songs. For the bass there is syncopation in ‘Digging in the Earth’ with two different synths. We perform this song we play it as you hear it. For example, the layered vocals require a live looper, where I sing one part, then sing over the additional parts as it loops live.  We recorded the song at The Cave recording studio in Eagle Rock by Jossiah Mazzachi (Light FM) (sessions with sound editor Morgen Stary) and the final mix was finished by Be Hussey at Comp-ny recording studio in Burbank. (Kevin Gray, who most recently engineered the reissue of Vangelis’s ‘Blade Runner’ mastered the vinyl release) Overall, we record the tracks all at once as we play the song, but we did do a little more quantizing and perfecting on this one because we wanted to inspire people to dance in a club.

TM – Who or what are some of your influences in an artistic sense?

TM – Are there any plans for live shows in support of your new debut album?

We are also in the process of planning a world tour, so if you are reading this interview and you or someone you know has some show ideas (we are open to anything- from a house party, to festival or venue), just drop us a line at luckyandlove.com.