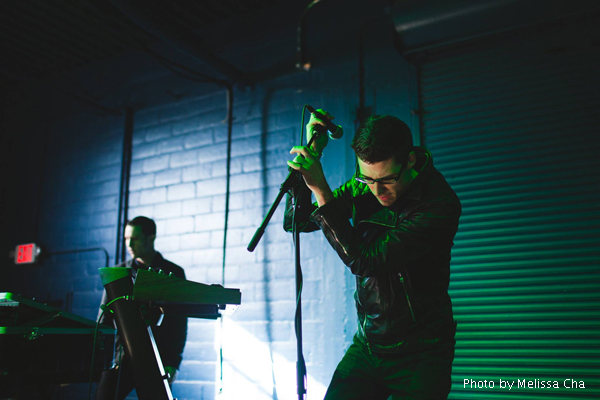 INHALT is a San Francisco based trio best known for their dynamic synth-driven dark electronic sound. Their first three releases were on notable record labels such as; a split 12” with London’s seminal World Unknown Records in 2011 and was followed by their ‘Vehicle’ and ‘Occupations’ EPs for San Francisco’s cult powerhouse Dark Entries Records. Taking inspiration from the raw recording style of the John Peel Sessions, INHALT’s latest release ‘Part Time Punks Sessions’ via Cleopatra Records was done entirely in the analog domain in a tape based context. “It was a great privilege to be asked to do this by Michael Stock (who runs Part Time Punks), and we delivered something that we feel matched the essence of PTP: raw, honest, and on the border between the past and the present.”

TM had the opportunity to ask INHALT a few questions including how they felt about their ‘Part Time Punks Sessions’ experience, connecting with their audience when playing live and what it was like playing with forbearers such as Front 242 and Clock DVA.

TM – Do you feel that the ‘Part Time Punks Sessions’ were successful in simplifying your approach to creating music?

INHALT – We wouldn’t necessarily say that it simplified it. It was just a different experience because it was conducted entirely in the analog domain with tape as the only recording medium. It removed the mediation of a screen and the entire culture of the computer screen and all associated assets of the computer influencing the workflow. So in a sense it, it focused it even more onto the music itself. However, during the mix processes we had to learn different techniques that perhaps we took for granted when working with a digital recording medium. The experience itself was very gratifying and we all found that we loved working in an entirely tape based context, so much so, that our next EP, “Commerce”, was largely done in a similar fashion.

TM – You say you literally bring your studio on stage when you play live. Do you feel like this approach has worked for you? Have you been able to connect with your audience the way you envision it being?

INHALT – One of the most gratifying aspects of being an electronic musician in 2017 is that there is an abundance of analog synthesizers and drum machines that are currently in production, that sound great, and allow a musician to bring far more physicality to an electronic music performance than the glowing laptop- an office supply item- could ever do. INHALT, is first and foremost song oriented and to a large extent we are traditional songwriters predominantly obsessed with the musicality of our songs, however, we choose the synthetic rather than acoustic expression (most of the time). Therefore, having the key instruments on stage allows for the kind of energy that is similar to the energy in the studio when we initially are writing and recording music. Our audiences usually get swept up both by the tonality and the visual and energetic stimulus of watching performers PLAY instruments. There are always limitations largely due to budget (we would love some risers and better lighting), but within the confines of this, we have found ways to innovate and center our performances to the energy of the music itself. Our audiences, even with a language barrier, have connected very well to our stage show because of this approach. We had a largely Texan audience shouting along to our German choruses last SxSW! We would say that’s a successful connection.

TM – Who were some of your biggest influences growing up?

INHALT – The hard work was already done since the song was originally written for our debut split 12” on World Unknown Records. The chief difference was that unlike having a full studio at our disposal to produce and decorate the song like on the first go, we had our streamlined and slightly harder version that we play live. There were no overdubs, we simply recorded the song in one take straight to analog magnetic tape and played it exactly as we would live.

TM – Do you feel like you can transcend feelings through your music?

INHALT – Feelings are largely part of an egoic narrative serving mostly to confirm an identity of lower consciousness. We are more interested in providing an energy source a listener can harvest from within our songs. In a way, this would be transcending feelings.

TM – Explain your style of music to a new audience.
INHALT – A new audience would be better served to attach their own label after hearing it rather than reading words describing it. We mostly make one kind of music: kick-ass.

TM – What was it like sharing the stage with legends Front 242 and Clock DVA?

INHALT – Absolutely fantastic. Adi from Clock DVA is a total legend and a wonderful and friendly artist. We were struck by just how intricately adapted his classic works were for 2017 and we found a lot of camaraderie between us and his whole band. Front 242 were adorable with their heavy accents and total professionalism. They were incredibly friendly beguiling the toughness of the music itself and were very kind with making sure all of the opening bands had enough time to properly sound check. We immensely appreciated their care for the success of the whole evening and not just their set.