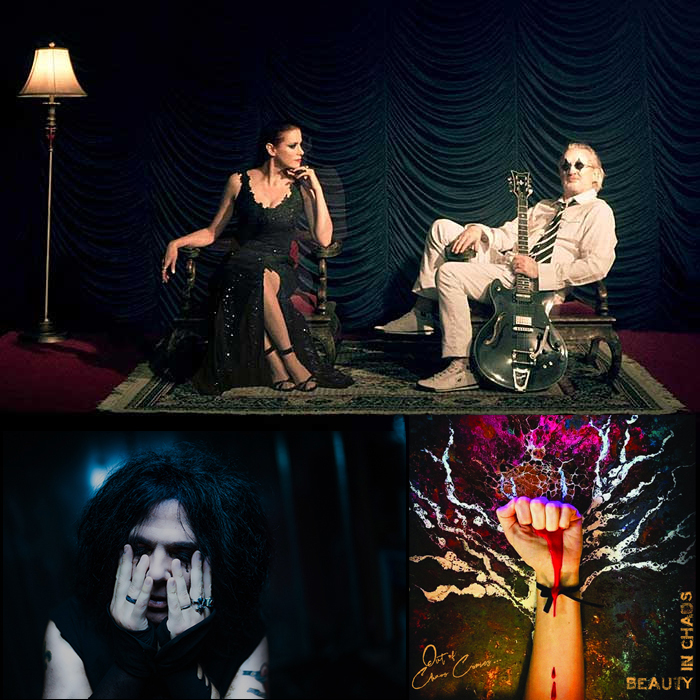 ‘The Delicate Balance of All Things’ (Rapid Reiteration Mix) ft Cinthya Hussey is the latest addition to the Beauty In Chaos collection of songs/videos.

Beauty In Chaos’ new video features the lovely vocals of Cinthya Hussey who is accompanied by her husband Wayne Hussey (The Mission) in this Lynchian adaptation of ‘The Delicate Balance of All Things’ (Rapid Reiteration Mix). This marks the fourth video/single to be released off the new BIC album ‘Out Of Chaos Comes…‘ via Los Angeles’ 33.3 Music Collective with production by the legendary Tim Palmer. The video, directed by Mark Bromilow, was filmed in San Paulo, Brazil.

The scene is set in a circus tent where “the beauty and the beast” play out a mind-bending delicate balancing act between black and white in a moody atmosphere of surreal enchantments. Torched caught up with Michael Ciravolo and Cinthya Hussey where they go into a few details on the new Beauty In Chaos song and video for ‘The Delicate Balance of All Things’ (Rapid Reiteration Mix).

TM – How did your collaboration with Michael Ciravolo come about? What are a few of your contributions to the Beauty In Chaos project?

Cinthya Hussey – Michael has always been very supportive to my artistic endeavours. First I was so surprised when he asked me if he could use some of my paintings as artwork for his upcoming album. Then after I released my cover of Morrissey’s ‘Everyday Is Like Sunday’ he asked if I would sing some BVs for Wayne on a remix for ‘The Delicate Balance…’. When we received the stems I decided to work on the whole song just for the fun of it and in case they thought anything else was worth keeping… Life can be full of beautiful surprises, can’t it? Then Michael tells me that the next BIC album is going to feature only female singers and asked me if I would be like to work with him again… Wow… I couldn’t be happier and I very much look forward to it!

TM – The video for Beauty In Chaos’ ‘The Delicate Balance of All Things (Rapid Reiteration Mix)’ featuring you on vocals has a very David Lynchian feel to it.. Was this intentional? If so, do you feel like the visuals were successful in achieving this goal?

David Lynch has been a constant and endless source of inspiration to me. I remember watching’ Twin Peaks – Fire Walk With Me’ as a teenager and my head exploding! It’s probably one of the films I’ve watched the most and it has influenced my artistic aesthetics ever since. It was one of the references I sent to my friend and director of the video, Mark Bromilow. I talked with him about the Silencio Club and how I would like to capture the dreamy and surreal atmosphere of David’s film’s. For a long time I tried to find the perfect location for our video… an old theatre or an abandoned warehouse that we could dress up with smoke, lights and velvet curtains. And when Mark came back to me with the idea of using the circus as our set and suggested the amazing Natalia Presser as an aerialist I knew we were on the same page. The results were beyond my expectations.

TM – The new video was directed by Mark Bromilow. How did this collaboration come about and what was it like working with him on this project?

Cinthya Hussey – Mark and I have been friends and working together for a few years now. While I was looking for a location for ‘My Heart Is A Ghost Town’ completely out of the blue he sent me the pictures for a property he had acquired in the countryside and I couldn’t believe I was looking at the exact set I had been dreaming about for my video. I sent him the lyrics and he immediately jumped on board! I was talking with other friends about the video for Delicate Balance when he asked if he could direct it as well. I was so happy and relieved to have a great partner that totally grasped the concept I was aiming for and more…

TM – What was it like working with Michael Ciravolo on this song and video?

Cinthya Hussey – Michael is one of the most generous and kind people I’ve ever worked with. He listens and respects my suggestions, he guides me when I am lost and connects me with so many amazing creative people. He’s become a good friend and a mentor to me.

Both with the song and the video he gave me total freedom to express myself and welcomed all our crazy ideas. We’ve sent him the stems for the vocals and along with Michael Rozon they edited the song, added Nick Johnston’s gorgeous guitar parts and sent the song back to us. Wayne and I suggested a few tweaks and they came back with the first haunting ‘Equipoise Remix’. A while later he surprised us with Tim Palmer’s ‘Rapid Reiteration Remix’ and I almost cried…

I feel so fortunate to be surrounded by incredible and supportive artists. The synergy has been overwhelming!

TM – Thank you so much for taking the time for Torched! Have a beautiful day!

Cinthya Hussey – Thank you so much for having me, dear! Have a wonderful day! xx

TM – Your new video (The Delicate Balance of All Things (Rapid Reiteration Mix) was directed by Mark Bromilow.. What did he bring to the table that was different than the previous BIC productions?

Michael Ciravolo – With Covid eliminating travel, I put full faith in Cinthya to ‘find a way’ to pull off a video that visually captured the beauty and vibe of the song. With her being an actress in Brazil, she was able to bring Mark on to help bring the concept that she and Wayne had for the video. They managed to find a great location … a circus tent at Circo Zanni in Sau Paulo and to also bring the aerialist Natalia Presser to be a part. Wayne and Cinthya worked extremely hard to make this happen, and Cinthya did a wonderful job editing it… gorgeous colours giving it a very David Lynch feel!

TM – What was your inspiration behind the music and direction for ‘The Delicate Balance of All Things’ (Rapid Reiteration Mix)?

As on ‘Beauty Re-Envisioned’, I loved the idea of remaking or reimagining songs. I already knew that Ashton (Nyte) and Johnny (Indovina) where doing acoustic renditions, so Michael Rozon and I talked about building a slightly ‘less ominous’ version of ‘delicate balance’. We built the new music around the tempo and Wayne’s original vocal. After receiving Cinthya’s vocal tracks back, we knew this was going to be something special. We reached out to the two most melodic and tasteful players we knew to help out … bringing in Canadian guitar virtuoso Nick Johnston and former Human Drama bassist Mike Mallory. Michael created the gorgeous ‘Equipose’ Mix which also appears on the album.

With Tim Palmer having some time, we sent the tracks over to him, and he added some wonderful drum programming and textures … yielding the ‘Rapid Reiteration’ mix that we chose for the video.

How did your collaboration with Cinthya come about? What was it like working with her on the new version of this track?

After hearing her version of ‘Every Day Is Like Sunday’, I really fell in love with her voice and started talking with her about writing a song for the next BIC record which I had already decided would feature all female singers. As Michael Rozon and I began putting together the more stripped-down version of ‘the delicate balance of all things’ for ‘Out Of Chaos Comes…’, I thought it would be cool to have her add some vocals to the new version along with Wayne. Honestly, I had thought it would be more of Cinthya adding harmonies or sort of a ‘duet’ with Wayne … but when Wayne sent a rough mix back, it was mainly Cinthya; which was absolutely stunning. Besides having a beautiful voice, she has a very original sense of melody and harmony… all which just worked so well and took this version to a different place. I could not be happier, and I look forward to working with her on the next BIC record.

Beauty In Chaos is a masterfully curated musical endeavor by Michael Ciravolo, who is not only an outstanding and well respected musician, engineer and producer in his own right but also the President and CEO of Schecter Guitar Research. His project brings together some of the most iconic names in the music world which includes, Wayne Hussey (The Mission), Simon Gallup (The Cure), Michael Aston (Gene Love Jezebel), Robin Zander (Cheap Trick), Ashton Nyte (The Awakening), Michael Rozon, Kevin Haskins (Love And Rockets), John Fryer (Producer/This Mortal Coil/4AD), Mark Gemini Thwaite (Peter Murphy, The Mission, Tricky) and Al Jourgensen (Ministry), to name a few.

‘Out Of Chaos Comes…’  is now available on vinyl (8 tracks), CD (14 tracks) and digitally (27 tracks). The full digital version is included with an LP / CD purchase. Limited-edition colored vinyl also includes an exclusive cover-art poster, signed by the many of the artists involved. It can be ordered in its various formats at http://www.beautyinchaosmusic.com/music-store.

The deep and diverse full 27-track collection (available on CD) includes a few
surprises. Ashton Nyte’s acoustic version of ‘The Outside’, Cinthya Hussey’s beautiful rendition of ‘The Delicate Balance Of All Things’ as well as her artistic contributions for the cover art, and an acoustic/mellotron drenched ‘Memory Of Love’ from Human Drama’s Johnny Indovina. You will even find some new and fantastic guitar moments from The Mission’s Simon Hinkler, Richard Fortus (Guns N’ Roses), Mark Gemini Thwaite (Peter Murphy, The WonderStuff) and Nick Johnston. The digital version also includes an additional track featuring Julian Shah-Tayler aka The Singularity.

Cinthya Hussey also just released ‘My Heart Is A Ghost Town’ (Julian Shah-Tayler’s Spooky Remix). The original version of this track is the very first song Cinthya has written based on a poem she wrote, which will be released on her debut album in 2021.

“The very talented musician Julian Shah-Tayler has worked with David J (Bauhaus), Joaquin Phoenix & Lana Del Rey, amongst others. Working his magic Julian has reinvented ‘My Heart Is A Ghost Town’ into a newly imagined luscious panoramic soundscape behind my vocals. I’m head over heels about this remix and I couldn’t have wished for a better birthday Present!”~ Cinthya.

Keep up with Beauty in Chaos