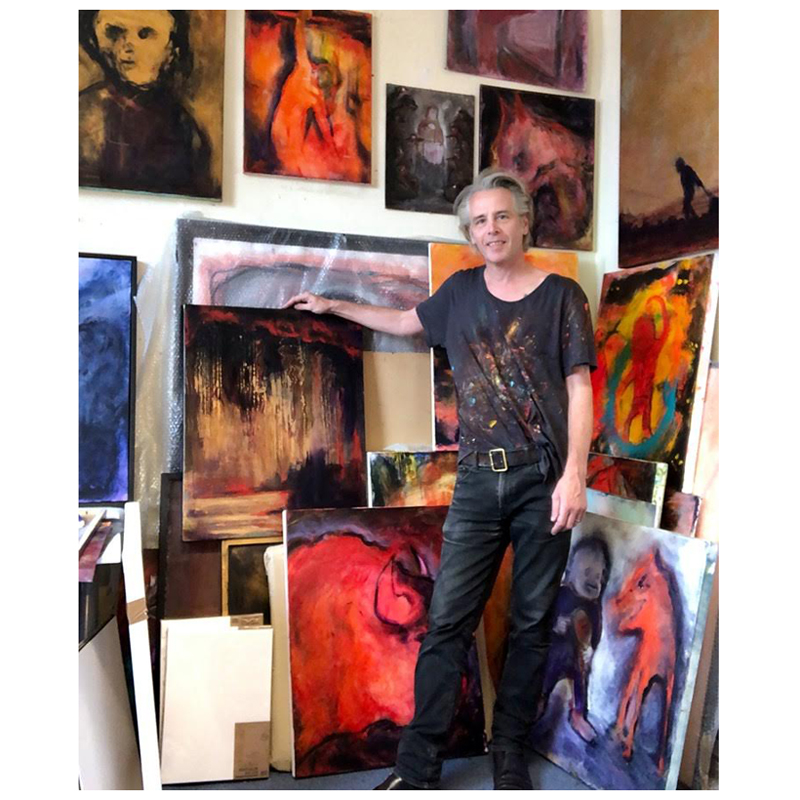 A Gothic Tale of Such

James Johnston, guitarist from the US band Lydia Lunch and Big Sexy Noise, ex Nick Cave and the Bad Seeds member (between 2003-2008), P.J.Harvey’s partner in music presents generally a good, dark, misty, scary music genre. We are dealing here with the very broad meaning of “agreement for harmony in qualities between people.” Certain critics in sympathy with at least the critical side, of such a theory, advanced in cases and if we find it intellectualistic, we tend to change the feeling of desire, aspiration, admiration etc…An English musician James Johnston has got talents.

As a painter at the moment, there is an exhibition of James’ paintings in London at CHARLIE SMITH Gallery. It is a group exhibition that includes James Johnston’s work presented as words that transform, vibrate and glow: 13 paintings inspired by the lyrics of Nick Cave. The exhibition was conceived over a year ago to illustrate Cave’s latest album, Ghosteen, and released with a painting as Cave’s cover for the album in October 2019. “Painting is a far more solitary pursuit, and after many years of touring probably why it was so attractive to me as it means I can work every day, the hours needed, without having to constantly travel,” says Johnston.

“I try to think about absolutely nothing and get lost in the process. Classical music at very low level in the background. It’s as much of a thrill as a gig, except it lasts eight hours or struggle and excitement. Leaving the studio at the end of the day can be a bit like the feeling you have when you walk out of a cinema after watching a film. It’s the most exciting thing I’ve ever done, and it’s all performed locked in a room on your own. It’s a strange, frustrating and thrilling process, about as close to a dream state as I can imagine,” he adds.

I cannot avoid defining my sympathy as such an intellect that does not freeze the ardor of generous desire and paralyze creative endeavor. And for the sake of argument, the intellect may become critical, unproductive. Sympathy is here for the art that alternative, indie, and gothic musician and painter James Johnston represent.

Remember famous “Scream” by Edward Munch: a certain ability to conjure apocalyptic landscapes, the songs on “Ghosteen” by Nick Cave as visions. James Johnston is a musician, a painter and an actor who had his role in the film directed by legendary gothic film director Ken Russel, is having his say via his music and paintings just the same. He seems like someone who is just like Russel in his film “The Fall of the House of Usher (A Gothic Tale for the 21st Century)”. In the long career of being an artist, he makes success in music and manages not to become a celebrity and not to be deprived of privacy. As just an artist, James is simply admired by many followers of alternative rock and admired as a gifted painter for raw, macabre humorous, haunted by Edward Munch kind of paintings, which strikes upon as a powerful imprint in the imagination. And, in the combination with music collaboration with Nick Cave, P.J.Harvey or L.Lunch he definitely rocks to indie music fans.

-Could you tell us your thoughts about the band Bauhaus? We are here on their pages, one of the first gothic bats of rock and roll.

“I saw Bauhaus play Guildford Civic on the In The Flat Field Tour, same week I saw the Birthday Party play a fantastic and under attended gig at Guildford University, I was about 15. A very exciting time for music, especially at that young age. I moved to London at 18 and saw bands like The Gun Club, Swans, Sonic Youth etc, it took a while to start my own band, but seeing a lot of live new music at the time was extremely inspirational. “

James Johnston has an upcoming solo exhibition at Schaeffers Gate 5 in Oslo which opens on May 7th, with further 2020 shows in Den Haag, London and Berlin.

Keep up with James Johnston