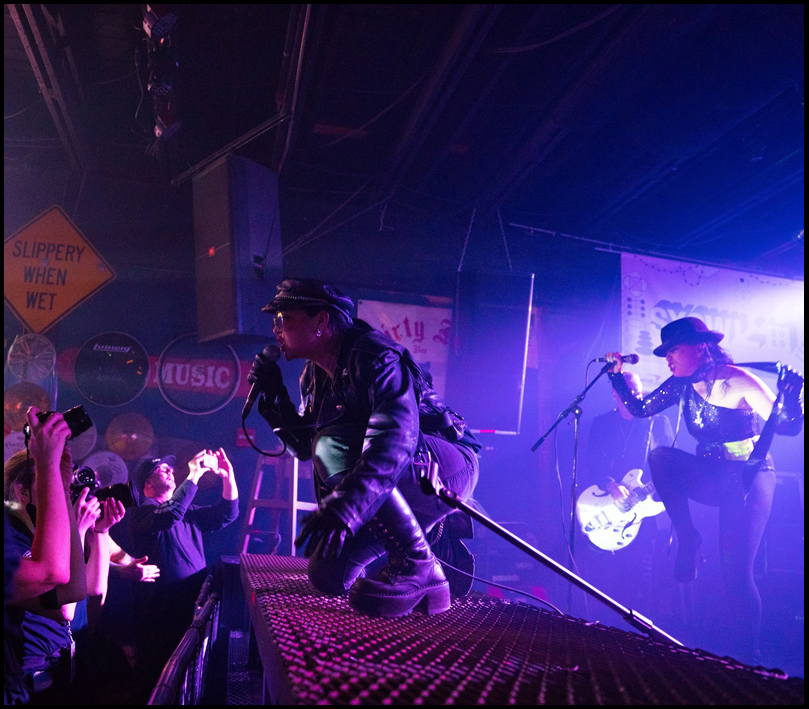 As a follow-up to their first ever live performance at the 2019 South By Southwest Music Festival in Austin, TX, wildly dynamic collective BLACK NEEDLE NOISE have announced that they will be playing a rare handful of shows in the Los Angeles, CA area in September. Led by producer extraordinaire John Fryer whose production oeuvre spans the last four decades of alternative music including Depeche Mode, Cocteau Twins, Nine Inch Nails, among dozens of other groundbreaking artists, Black Needle Noise will include Fryer (guitar) and Sean Haezebrouck (drums). Providing most of the vocals will be Anjela Piccard and Betty X who lent her voice to the single “Social Media Disease” which Torched Magazine called “one of our favorite tracks by Black Needle Noise to date!” Other guest vocalists are planned to join in as well, including Becca Schack who will sing her track “Upside Down”. Cheekily called The World Tour of Hollywood, these dates will precede their upcoming dates in Chile this December.

Documenting their first ever live shows at South By Southwest Music Festival in Austin, TX in March 2019, Black Needle Noise had filmed a rockumentary about the preparation and performance of their shows, offering a glimpse of the what’s in store for the SoCal dates in a few weeks.

In addition to the live performances, Lost in Reflections – Black Needle Noise’s second vinyl album will be available for presale at the merch table at the shows. Officially set for release on October 13, 2019, the album will include tracks such as “A Shiver of Want” featuring vocals by Frontline Assembly’s Bill Leeb, “Warning Sign” with vocals by electronic vocalist Kendra Frost, and “Treasured Lies” featuring Nordic songstreess Zialand.

Black Needle Noise’s most recent single “Seed of Evil” featured vocals by the Lord of Lard himself, Raymond Watts of post-punk band and premiered on ReGen Magazine, who pointed out its “sultry and slithering bass line and a strutting drumbeat that’s sure to remind many of the funky disco sleaze of Iggy Pop’s ‘Nightclubbing’ and Nine Inch Nails’ ‘Closer’.”

John Fryer started his career in 1979 at London’s Blackwing Studios (London) and soon began working with seminal bands on the 4AD, Mute, Rough Trade, and Beggars Banquet record labels, including Depeche Mode, The Wolfgang Press, and Cocteau Twins. His achievement in helping develop the latter’s pioneering ethereal and ambient sound ultimately led Watts-Russell to recruit Fryer as his partner for This Mortal Coil.