As 2017 winds down to it’s final days we can look back on a highly successful year for Kevin Haskins, founding member of Bauhaus, Love And Rockets, and Tones On Tail. His latest project Poptone, which is a retrospective journey into his vast catalog, who along with Daniel Ash and daughter Diva just finished a highly successful North American tour. It all started last spring at Swing House Studios in LA and wound it’s way through the United States and Canada with the final date ending in Dallas this early December. Fans can look forward to more live shows from Poptone in 2018, starting off early in the new year with dates in Mexico.

Poptone’s rich history started off in the late 70’s with the legendary Post-Punk band Bauhaus. The founding members were Daniel and Kevin along with Peter Murphy and David J (Kevin’s brother). They would go onto produce one of the greatest goth anthems of our time, ‘Bela Lugosis’ Dead’. It was most notably used for the dramatic opening sequence of Tony Scotts, ‘The Hunger’ starring David Bowie. Even though Bauhaus would disband in 1983, it was just the beginning for all four members as they embarked on new endeavors that would intertwine and over lap for the next four decades. Some of the most notable projects after Bauhaus include Tones On Tail, Love And Rockets, Dalis Car, The Jazz Butcher Conspiracy, various solo ventures and in 2017, Poptone.

In their initial 2017 press release, Poptone  announced, “Daniel and Kevin are revisiting their storied catalogue and presenting in a fresh, new direction, to combine their histories with a reinvigorated outlook for new tours and potentially new music.”

Torched Magazine is honored to have had the opportunity to talk with Kevin Haskins about his new book Bauhaus Undead, a few hilarious Bauhaus recollections, and what it was like growing up in Northampton…plus more..

TM – Seeing Bauhaus for the very first time live at The Palladium in Hollywood 1998 was one of the most incredible and exciting concert experiences of my life. How did it feel to play together again as Bauhaus after so many years apart?

Kevin – Thank you for your kind words. It was a wonderful experience to play together again. The songs are timeless and I felt invincible playing the shows on that tour!

TM – What is one story that you’ve never told before that will be released in your book?

Kevin – There are several. I wrote about thirty stories. Some of the lesser known that come to mind are about the haunted house we all lived in together and our first ever gig supporting The Pretenders although we crashed the gig!

TM – What inspired you to start collecting memorabilia back in the early days of Bauhaus? Did you somehow have an idea of how cherished this would be someday?

Kevin – I think I began collecting when we started to have articles in our local newspaper. That was exciting to me and so I cut them out. It just went on and on from there. I think that when you’re young that you don’t really think of how cherished things will become. 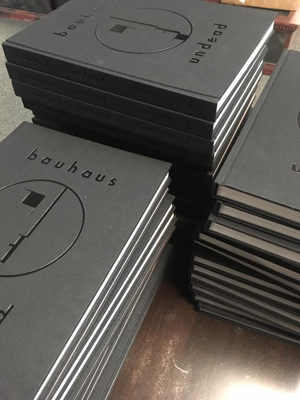 To order… Bauhaus – Undead “The Visual History and Legacy of Bauhaus”

TM – An excerpt from your book BAUHAUS UNDEAD states “It was customary on the last date of touring to play pranks on the crew, support bands and vice versa. Everybody was on heightened alert; running surveillance and checking their shoes for toothpaste and the like.” What were a few of the best pranks that were pulled off by you or other members of the band/crew?

Kevin – On our “last Bauhaus show” in ’83 the crew sawed through 95% of my drumsticks so that they kept breaking during every song. They also poured tons of talcum powder on my drums so that I was enveloped in clouds of white powder during the first song. To top this off they chained one of my legs to the drum stool whilst I was playing.

TM – Are there any Love And Rockets songs that were finished or close to finishing that were never released? If yes, will these tracks ever see the light of day?

Kevin – There are a few demos knocking around but Daniel and I don’t feel that they pass muster to be released.

TM – What was it like growing up in Northampton? What did you and your brother do for fun in your youth?

Kevin – Well pre teen years were lots of fun. We lived close to the edge of town bordering farms and endless fields. I can recall setting out on my bike peddling about ten miles everyday exploring the countryside. We made go-carts and got up to all sorts of adventures.

Kevin – I do not. I have been way too busy managing the band and running our merchandise company. I’m looking forward to painting again when I can find time.

TM – Next year will be the 40th anniversary of Bauhaus, I’m sure that you could make a significant amount of money from a reunion. Are you not tempted?

Kevin – Yes we could! I’m not convinced it’s advisable though.

TM – What do you think is one of humanities greatest causes at this moment in time?

Kevin – Love; To relinquish power, greed, violence and ego. To love and respect each other and every living creature on the planet.

TM – It’s a true honor having this opportunity to interview you Kevin! Thank you so much for taking the time for Torched Magazine! All the best for your continued success!

Keep up with Poptone

Keep up with Kevin Haskins