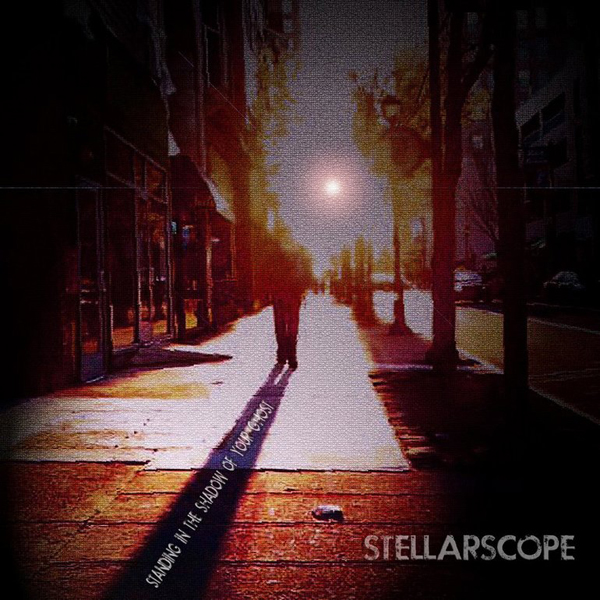 Stellarscope’s latest release, ‘Standing In The Shadow Of Your Ghost’, is infused with what could easily be found in your early 80’s alternative scene with bands like The Sisters of Mercy, Joy Division, Bauhaus and The Jesus and Mary Chain. They’ve masterfully taken bits and pieces from the Post Punk era and brought them forward into today’s realm. They are Tom Lugo (guitar/vocals), Robert Deflaviis (bass), and Robert Forman (drums).

Lyrically and sonically this album shines a flashlight on humanities dark shadows that roam the horizon at dusk and puts you face to face with all of it’s ill’s, such as fear, pain and loss. “We use music to express our disappointment, our fears, our anger, and sometimes the feeling of love. It’s our way to channel our aggression, our confusion; get through depression, and be at peace with the things that we cannot control.”

They have consistently played the East Coast of the USA & Canada for many years as well as coordinating festivals like the Popnoise Festival and the Walls of SoundFest. Their discography includes several albums, EPs, and participations in various worldwide compilations and tribute albums including Jesusland (a tribute to The Jesus and Mary Chain), Blue Skied, and Clear (a tribute to Slowdive), and many more. Their music has also been featured on MTV, Sci Fi Channel, A&E, and Discovery Channel. (stellarscopeband.com)

Torched Magazine is pleased to have had the opportunity to talk with Tom Lugo and the members of Stellarscope about their latest release ‘Standing In The Shadow Of Your Ghost’, their own record label ‘Patetico Recordings’ that, as of recently, has been releasing humanitarian efforts, and where they find inspiration plus more…

Tom Lugo – First, thank you for interviewing us. It really means a lot to us. Our creative influences are drawn primarily from life experiences; the issues that plague us both on an individual level as well as a collective. We use music to express our disappointment, our fears, our anger, and sometimes the feeling of love. It’s our way to channel our aggression, our confusion; get through depression, and be at peace with the things that we cannot control.

Tom Lugo – Bob Forman plays tennis and hits the gym often to keep in shape and to keep him focused. Our bass player, Bob DeFlaviis, is into canoeing for its meditative properties. I have practiced Martial Arts all my life and it helps maintain me balanced, mentally and physically, and clear headed.

TM – Are your lyrics generic or based on real experiences? Could you expand on your answer?

Tom Lugo – The lyrics I write are based on particular events or situations. When I was young I had a lot of trouble focusing due to suffering from severe ADHD and a behavioral therapist gave some guidelines on how to cope with the illness which included keeping a journal. I tried to keep a journal with no avail however I found myself writing down my thoughts in a poetic way so I started using them as lyrics. In a way, every album I have written is my diary, a window into the inner depths of my mind and my feelings. When I hear any particular song we have recorded I can feel the emotions that brought me to write the lyrics in the first place.

TM – What kind of advice would you give to a newer musician who is just starting out?

Tom Lugo – Learn as much about the business side as you can; being educated in these matters will help you avoid issues later in your career. Don’t focus on money, celebrity, or immediate success. If you do, you are setting yourself up for disappointment. Music is what is there for you when everything else fails, when things go right, it’s the spark to life. There’s a quote by Bernard Shaw that summarizes it all: “Music is its own reward.”

TM – What was your inspiration behind your latest release ‘Standing In The Shadow Of Your Ghost’? Could you briefly describe the music-making process?

Tom Lugo – The album is about dealing with the aftermath of long term relationship coming to an end, dealing with the sense of loss, the despair of an uncertain future, and the sense of hope. For this album I wrote the primary ideas on bass and then jammed them with Bob Forman on drums. Once we had a general idea of how we wanted the songs to sound like I took the song skeletons to my home studio. I then I laid the guitars and recorded the vocals. The mix down and mastering was the process that took me the longest.

TM – How has your music evolved since you first began playing music together? When and where did it all start for you?

Tom Lugo – We are more structured now than we were when we started almost 20 years ago. In the initial stages we developed most of our songs from jams we had done not necessarily focused on the song structure per se. Now we are more mindful of the song structure and the melodies. Our sounds continues to evolve with every new album, sometimes it work and sometimes it doesn’t, but we continue to push ourselves to do better than we have done before.

TM – I understand you also have your own record label ‘Patetico Recordings’ where you’ve released your own work amongst many other artists from all over the world. Can you briefly go into this venture?

Tom Lugo – Patetico Recordings started as a vanity label to release my own music. As the years went on I decided to help out other artists in different parts of the world and serve platform for them to get more visibility. I used a similar model to what I had done with the Popnoise Festivals, which primary focus was the exposure of the participating bands to a varied audience. Lately the label’s focus has been releasing disaster relief compilations to benefit victims of natural disasters around the world which include “Rock Back for Japan”, “Rock Back Animal Rescue”, “Rock Back for Ecuador”, “Rock Back for Nepal”, and we are about to release “Rock Back: Stronger than the storm” that will benefit those affected by Hurricane Harvey, Hurricane Irma, Hurricane Maria, and the earthquakes in Mexico.

Tom Lugo – I will have another Panophonic (my solo project) full length album released in October and it will be titled “Endlessly”. I have released two singles and the reception has been positive thus far.

Again, I would like to thank you for kindness and the interview. I wish you and your readers success, happiness, and inner peace.

All photos and album art by Tom Lugo